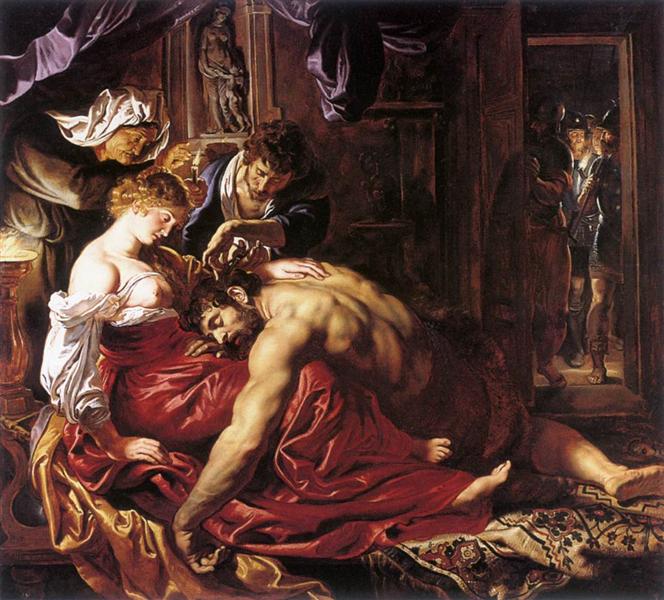 In this painting, Ruben depicts the moment when a servant cuts Samson’s hair, the source of his great power, while he is sleeping, after which he is arrested by Philistine soldiers, who can be seen through the doorway in the background of the painting. The painting was commissioned by the alderman of Antwerp, Nicholas Rockox, for his town house. Upon his death, the painting became part of the Liechtenstein Collection in Vienna, along with Rubens’ other masterpiece The Massacre of the Innocents. It was incorrectly attributed to Gerard von Honthorst, a Flemish painter, contemporary of Rubens’ who, like Rubens, also was heavily influenced by Caravaggio’s works.

Samson and Delilah is a painting by the Flemish Baroque painter Peter Paul Rubens (1577–1640) which is currently on display in the National Gallery. It dates from about 1609 to 1610. Two preliminary copies of the painting also exist today: an ink and wash drawing on paper, and an oil sketch on wood panel. The oil sketch is currently on display in the Cincinnati Art Museum, while the ink sketch is being held in a private collection in Amsterdam.

The painting depicts an episode from the Old Testament story of Samson and Delilah (Judges 16). Samson was a Hebrew hero known for fighting the Philistines. Having fallen in love with Delilah, who has been bribed by the Philistines, Samson tells her the secret of his great strength: his uncut hair. Without his strength, Samson is captured by the Philistines.

Rubens portrays the moment when, having fallen asleep on Delilah's lap, a young man cuts Samson's hair. Samson and Delilah are in a dark room, which is lit mostly by a candle held by an old woman to Delilah's left. Delilah is depicted with all of her clothes, but with her breasts exposed. Her left hand is on top of Samson's right shoulder, as his left arm is draped over her legs. The man snipping Samson's hair is crossing his hands, which is a sign of betrayal. Philistine soldiers can be seen in the right-hand background of the painting.

The niche behind Delilah contains a statue of the Venus, the Goddess of love, and her son, Cupid. Notably, Cupid's mouth is bound, rather than his eyes. This statue can be taken to represent the cause of Samson's fate and the tool of Delilah's actions.

The old woman standing behind Delilah, providing further light for the scene, does not appear in the biblical narrative of Samson and Delilah. She is believed to be a procuress, and the adjacent profiles of her and Delilah may symbolise the old woman's past, and Delilah's future.

The painting was originally commissioned by Nicolaas II Rockox, Lord mayor of Antwerp, Belgium, for his Rockox House. In addition to being a patron, Rockox was a close personal friend of Rubens. The painting was specifically intended to be placed above a 7-foot mantleshelf, where the painting would have been seen from below.

The painting was publicly sold for charity when Rockox died in 1640, but it is unknown who the painting was sold to. In 1700, a panel named Samson and Delilah was bought by Prince Johann Adams Andreas I. This painting was likely Rubens' painting. However, when the painting was part of the Liechtenstein Collection in Vienna, Austria in the eighteenth century, the painter was identified as Jan van den Hoecke, who was a principal assistant of Rubens in the 1630s. The painting was then sold in 1880 in Paris, where it was later found by Ludwig Burchard in 1929. Eventually, the painting sold at auction in 1980 at Christie's, purchased by the National Gallery, London for $5 million.

There has been some doubt cast over the attribution of the painting to Rubens, led by the artist and scholar of Fayum portraits Euphronsyne Doxiades. She argues that it varies in details from copies of the original made during Rubens' lifetime, that it does not employ the layering technique of glazing common in oil painting at the time and mastered by Rubens, and that its provenance can not be documented with certainty between 1641 and 1929. A dendrochronological examination of the painting, however, confirms that the painting dates to the correct period, and the attribution has been accepted by a majority of the art historical scholarly community.