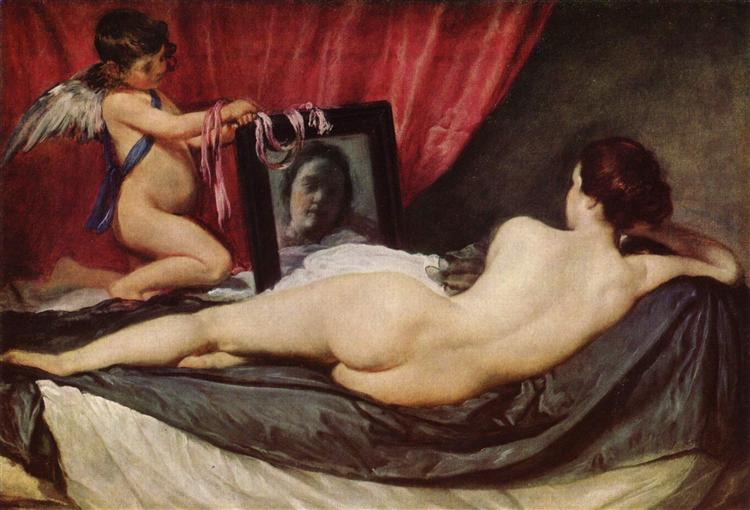 The Rokeby Venus (/ˈroʊkbi/; also known as The Toilet of Venus, Venus at her Mirror, Venus and Cupid, or La Venus del espejo) is a painting by Diego Velázquez, the leading artist of the Spanish Golden Age. Completed between 1647 and 1651, and probably painted during the artist's visit to Italy, the work depicts the goddess Venus in a sensual pose, lying on a bed and looking into a mirror held by the Roman god of physical love, her son Cupid. The painting is in the National Gallery, London.

Numerous works, from the ancient to the baroque, have been cited as sources of inspiration for Velázquez. The nude Venuses of the Italian painters, such as Giorgione's Sleeping Venus (c. 1510) and Titian's Venus of Urbino (1538), were the main precedents. In this work, Velázquez combined two established poses for Venus: recumbent on a couch or a bed, and gazing at a mirror. She is often described as looking at herself on the mirror, although this is physically impossible since viewers can see her face reflected in their direction. This phenomenon is known as the Venus effect. In a number of ways the painting represents a pictorial departure, through its central use of a mirror, and because it shows the body of Venus turned away from the observer of the painting.

The Rokeby Venus is the only surviving female nude by Velázquez. Nudes were extremely rare in seventeenth-century Spanish art, which was policed actively by members of the Spanish Inquisition. Despite this, nudes by foreign artists were keenly collected by the court circle, and this painting was hung in the houses of Spanish courtiers until 1813, when it was brought to England to hang in Rokeby Park, Yorkshire. In 1906, the painting was purchased by National Art Collections Fund for the National Gallery, London. Although it was attacked and badly damaged in 1914 by the suffragette Mary Richardson, it soon was fully restored and returned to display.

Venus gazes into a mirror held by Cupid, who is without his usual bow and arrows. When the work was first inventoried, it was described as "a nude woman", probably owing to its controversial nature. Venus looks outward at the viewer of the painting through her reflected image in the mirror. However, the image is blurred and reveals only a vague reflection of her facial characteristics; the reflected image of the head is much larger than it would be in reality. The critic Natasha Wallace has speculated that Venus's indistinct face may be the key to the underlying meaning of the painting, in that "it is not intended as a specific female nude, nor even as a portrayal of Venus, but as an image of self-absorbed beauty." According to Wallace, "There is nothing spiritual about face or picture. The classical setting is an excuse for a very material aesthetic sexuality—not sex, as such, but an appreciation of the beauty that accompanies attraction."