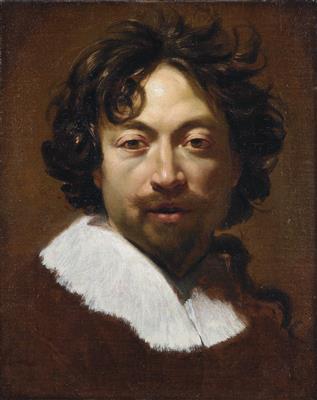 Simon Vouet (French: [vwɛ]; 9 January 1590 – 30 June 1649) was a French painter who studied and rose to prominence in Italy before being summoned by Louis XIII to serve as Premier peintre du Roi in France. He and his studio of artists created religious and mythological paintings, portraits, frescoes, tapestries, and massive decorative schemes for the king and for wealthy patrons, including Richelieu. During this time, "Vouet was indisputably the leading artist in Paris," and was immensely influential in introducing the Italian Baroque style of painting to France. He was also "without doubt one of the outstanding seventeenth-century draughtsmen, equal to Annibale Carracci and Lanfranco."

Simon Vouet was born on January 9, 1590 in Paris. His father Laurent was a painter in Paris and taught him the rudiments of art. Simon's brother Aubin Vouet was also a painter, as also was Simon's wife Virginia da Vezzo, their son Louis-René Vouet, their two sons-in-law, Michel Dorigny and François Tortebat, and their grandson Ludovico Dorigny.

Simon began his career as a portrait painter. At age 14 he travelled to England to paint a commissioned portrait and in 1611 was part of the entourage of the Baron de Sancy, French ambassador to the Ottoman Empire, for the same purpose. From Constantinople he went to Venice in 1612 and was in Rome by 1614.


He remained in Italy until 1627, mostly in Rome where the Baroque style was becoming dominant. He received a pension from the King of France and his patrons included the Barberini family, Cassiano dal Pozzo, Paolo Giordano Orsini and Vincenzo Giustiniani. He also visited other parts of Italy: Venice; Bologna (where the Carracci family had their academy); Genoa (where, from 1620 to 1622, he worked for the Doria princes); and Naples.


He was a natural academic, who absorbed what he saw and studied, and distilled it in his painting: Caravaggio's dramatic lighting; Italian Mannerism; Paolo Veronese's color and di sotto in su or foreshortened perspective; and the art of Carracci, Guercino, Lanfranco and Guido Reni.


Vouet's immense success in Rome led to his election as president of the Accademia di San Luca in 1624. His most prominent official commission of the Italian period was an altarpiece for St Peter's in Rome (1625–1626), destroyed at some time after 1725 (though fragments remain.)


In response to a royal summons, Vouet returned to France in 1627, where he was made Premier peintre du Roi. Louis XIII commissioned portraits, tapestry cartoons and paintings from him for the Palais du Louvre, the Palais du Luxembourg and the Château de Saint-Germain-en-Laye. In 1632, he worked for Cardinal Richelieu at the Palais-Royal and the Château de Malmaison. In 1631 he decorated the château of the président de Fourcy, at Chessy, the hôtel Bullion, the château of Marshal d'Effiat at Chilly, the hôtel of the Duc d’Aumont, the Séguier chapel, and the gallery of the Château de Wideville.


Today, a number of Vouet's paintings are lost, and "only two major decorative schemes survive, those for the chateaux of Colombes and Chessy," but the details and imagery of many lost works are known from engravings by Michel Dorigny, François Tortebat, and Claude Mellan.