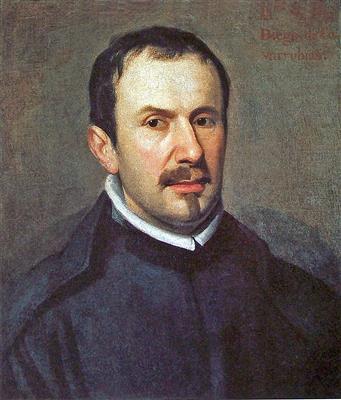 
Juan van der Hamen was baptized on 8 April 1596 in Madrid, therefore, he must have been born there just days before that date. He was the son of Jan van der Hamen, a Flemish courtier, who had moved to Madrid from Brussels before 1586, and Dorotea Witman Gómez de León, a half-Flemish mother of noble Toledan ancestry. Van der Hamen and his two brothers Pedro and Lorenzo (both of whom were writers) emphasized their Spanish roots by using all or part of their maternal grandmother's family name, Gómez de León.
The painter's father, Jan van der Hamen, had come to Spain, as an archer, to the court of Philip II where he settled, married, and his children were born. According to 18th-century sources, the artist's father had also been a painter, but there is no evidence for this.
Juan van der Hamen inherited his father's honorary positions at court and also served as unsalaried painter of the king. Van der Hamen's artistic activity in the service of the crown is first recorded on 10 September 1619, when he was paid for painting a still life for the country palace of El Pardo, to the north of Madrid.


Noted for his versatility, Juan van der Hamen painted religious history paintings; allegories, landscapes, low-life subjects, portraits and still lifes but the last two categories brought him the greatest fame. He served at the courts of Philip III and Philip IV and established the popularity of the new genre of still life in Madrid in the 1620s.


A prolific artist, van der Hamen painted all his works during the first decade of the reign of Philip IV. It is known that he painted more still lifes in 1622 than in any other period of his life.


He also reached great personal fame as a portraitist, being this field, the one that provided him with greater personal success, since still life was considered a lesser genre. He executed a portrait of Philip IV and worked during the 1620s in a series of portraits of the principal intellectuals and writers of his time, including: Lope de Vega, Francisco de Quevedo, Luis de Góngora, Jose de Valdivieso, Juan Pérez de Montalbán, Juan Ruiz de Alarcón and Francisco de Rioja. On van der Hamen's death, twenty of these portraits were inventoried as a single item among his belongings. The portrait of his older brother, Lorenzo van der Hamen, probably belonged to this series. The series itself was a focal point for philosophic speculation on the art of portraiture by some of the most distinguished minds of the time, who frequently praised Juan van der Hamen in verse and prose.


Among Van der Hamen portraits, there is one of a dwarf, painted around 1623 in a powerful naturalistic style. This painting (Madrid, Museo del Prado) anticipated the later made by Velázquez.