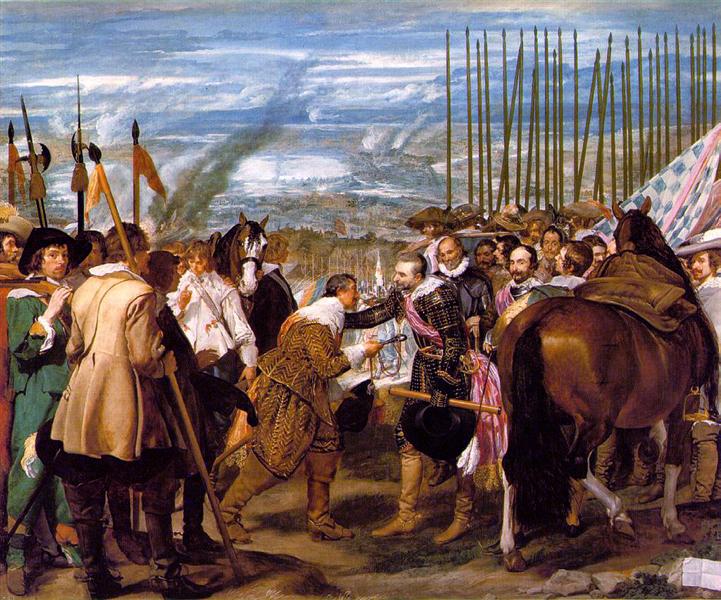 The Surrender of Breda

La rendición de Breda (English: The Surrender of Breda, also known as Las lanzas - The Lances) is a painting by the Spanish Golden Age painter Diego Velázquez. It was completed during the years 1634–35, inspired by Velázquez's visit to Italy with Ambrogio Spinola, the Genoese general who conquered Breda on June 5, 1625. It is considered one of Velázquez's best works. Jan Morris has called it "one of the most Spanish of all pictures".

The capture of Breda in 1625 was one of the major successes of Spanish arms in the latter stages of the Eighty Years' War. The Spanish general, Genoese aristocrat Ambrogio Spinola, conquered Breda against the instructions of his superiors. Before its capture, the Spanish government had decided that siege warfare against heavily defended towns of the Low Countries was too wasteful and that they would concentrate instead on an economic blockade of the Dutch Republic. The bulk of Spanish forces were diverted to the unfolding Thirty Years War.

Breda, a city near the frontier of Holland proper had been occupied in 1567 by the Duke of Alba, ten years afterwards recovered by Holach, and again seized by Haultepenne. The town was the seat of the Orange family, who had a castle there.

In 1624, the suspension of hostilities in Germany enabled the Spanish to concentrate their forces towards Breda. Although attacking such a formidable fortress was widely considered to be unwise, Ambrogio Spinola made the bewildering executive decision to march on Breda, accompanied by the Marquis de Leganés and Carlos Coloma. Spinola had made a military reputation for himself in 1604 and been rewarded with the Golden Fleece for conquering Ostend in Flanders. Consequently, the siege of Breda was not only a clash between the Netherlands and Spain, but a “decisive contest between two famous generals, [Spinola and Dutch general Nassau], both well versed in the arts of fortification, who had their renown at stake”.

Defending the Dutch, Maurice of Nassau led hostilities against Spinola but died before the end of the siege. His successor, Frederick Henry, unsuccessfully attempted to revive Dutch momentum, but ultimately surrendered in May. The terms of defeat at Breda were some of the most honorable and lenient of the time. Spinola died in the autumn of 1630, only a year after Velazquez had sailed with him on the voyage to Italy. In 1637 Breda was recaptured by Frederick Henry after a four-month siege, and in 1648 it was finally ceded to the Dutch Republic by the Treaty of Westphalia.

Velázquez painted The Surrender of Breda as an emblem of Spanish nationalism and as a tribute to Ambrogio Spinola. Diego Velázquez and Ambrogio Spinola had been thrown closely together “During the voyage from Barcelona to Genoa, in 1629… The artist must also have been more deeply affected than others by the tragic result of the siege of Casale, which occurred soon after the voyage – how Spinola was shamefully sacrificed; and how, mortified at the slur cast on his military honor, he soon after sank with gloomy thoughts into the grave.”