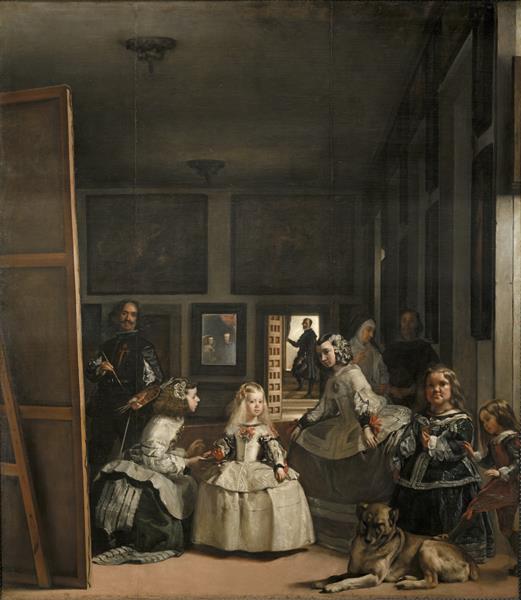 Las Meninas (pronounced [las meˈninas]; Spanish for The Ladies-in-waiting) is a 1656 painting in the Museo del Prado in Madrid, by Diego Velázquez, the leading artist of the Spanish Golden Age. Its complex and enigmatic composition raises questions about reality and illusion, and creates an uncertain relationship between the viewer and the figures depicted. Because of these complexities, Las Meninas has been one of the most widely analyzed works in Western painting.

The painting shows a large room in the Royal Alcazar of Madrid during the reign of King Philip IV of Spain, and presents several figures, most identifiable from the Spanish court, captured, according to some commentators, in a particular moment as if in a snapshot. Some look out of the canvas towards the viewer, while others interact among themselves. The young Infanta Margaret Theresa is surrounded by her entourage of maids of honour, chaperone, bodyguard, two dwarfs and a dog. Just behind them, Velázquez portrays himself working at a large canvas. Velázquez looks outwards, beyond the pictorial space to where a viewer of the painting would stand. In the background there is a mirror that reflects the upper bodies of the king and queen. They appear to be placed outside the picture space in a position similar to that of the viewer, although some scholars have speculated that their image is a reflection from the painting Velázquez is shown working on.

Las Meninas has long been recognised as one of the most important paintings in Western art history. The Baroque painter Luca Giordano said that it represents the "theology of painting" and in 1827 the president of the Royal Academy of Arts Sir Thomas Lawrence described the work in a letter to his successor David Wilkie as "the true philosophy of the art". More recently, it has been described as "Velázquez's supreme achievement, a highly self-conscious, calculated demonstration of what painting could achieve, and perhaps the most searching comment ever made on the possibilities of the easel painting".

In 17th-century Spain, painters rarely enjoyed high social status. Painting was regarded as a craft, not an art such as poetry or music. Nonetheless, Velázquez worked his way up through the ranks of the court of Philip IV, and in February 1651 was appointed palace chamberlain (aposentador mayor del palacio). The post brought him status and material reward, but its duties made heavy demands on his time. During the remaining eight years of his life, he painted only a few works, mostly portraits of the royal family. When he painted Las Meninas, he had been with the royal household for 33 years.

Philip IV's first wife, Elizabeth of France, died in 1644; and their only son, Balthasar Charles, died two years later. Lacking an heir, Philip married Mariana of Austria in 1649, and Margaret Theresa (1651–1673) was their first child, and their only one at the time of the painting. Subsequently, she had a short-lived brother Philip Prospero (1657–1661), and then Charles (1661–1700) arrived, who succeeded to the throne as Charles II at the age of three. Velázquez painted portraits of Mariana and her children, and although Philip himself resisted being portrayed in his old age he did allow Velázquez to include him in Las Meninas. In the early 1650s he gave Velázquez the Pieza Principal ("main room") of the late Balthasar Charles's living quarters, by then serving as the palace museum, to use as his studio. It is here that Las Meninas is set. Philip had his own chair in the studio and would often sit and watch Velázquez at work. Although constrained by rigid etiquette, the art-loving king seems to have had an unusually close relationship with the painter. After Velázquez's death, Philip wrote "I am crushed" in the margin of a memorandum on the choice of his successor.