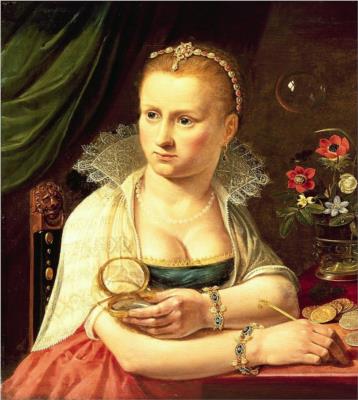 Clara Peeters (fl. 1607–1621) was a still-life painter who came from Antwerp and trained in the tradition of Flemish Baroque painting, but probably made her career mostly in the new Dutch Republic, as part of Dutch Golden Age painting. Many aspects of her life and work remain very unclear, especially outside the period 1607 to 1621 from which period dated paintings are known. As Seymour Slive puts it "Not a single uncontested document has surfaced about her life but there is reason to believe she was active in both Flanders and Holland."

She was unusual for her time in being a female painter, and is the earliest significant woman painter of the Dutch Golden Age; if regarded as a Flemish painter, she was the most famous Flemish woman of the 17th century. Most female Dutch painters also specialized in still lifes, which did not require knowledge of anatomy, among other advantages for women. Unlike Maria van Oosterwyck and Rachel Ruysch, who specialized in flower painting, Peeters painted mostly subjects including food, and was prominent among the artists who shaped the traditions of the Dutch ontbijtjes, "breakfast pieces" with plain food and simple vessels, and banketje, "banquet pieces" with expensive cups and vessels in precious metals. More than any other artist, her works often include careful depictions of different types of cheese.

Little is known about the life of Clara Peeters. It is generally agreed by scholars that her work points to her being a native of Antwerp. The city of Antwerp's archives hold a record of a Clara Peeters, daughter of Jean (Jan) Peeters, baptized on 15 May 1594 in the Church of St. Walburga in Antwerp. A second document indicates a marriage between a Clara Peeters and Henricus Joosen on 31 May 1639, in the same church. However, both Clara and especially Peeters were common names in Antwerp. A baptism in 1594 would imply that her 1607-dated paintings were done when she was 12 or 13. Some scholars doubt that those early works could have been done by one so young and have posited that she was born in the 1580s.

Peeters was established in Amsterdam by 1611 and is documented in The Hague in 1617. Some have suggested that in light of there not being any evident work by Peeters after 1621, she ceased painting after getting married, as for example Judith Leyster effectively did. Because of the number of apparent copies of her work by various hands, some speculate that she may have headed a small school of artists. Two 1630s paintings of nearly the same still life, in her style and signed CP, are currently considered anonymous and not from her hand. A painting supposedly by her and dated 1657 was recorded but is now lost. This is much later than the dating given to her surviving works. No record indicating Peeters' date of death has been found; however, scholars speculate various dates: in or after 1621; after 1654; after 1657; 1659 and 1676.

Peeters' first known painting is signed and dated 1607; the technical polish and compositional sophistication of this painting and of her other early works indicate the skill of a highly trained artist. Her work suggests training in Antwerp, a city where artists stressed detail and careful finish in painting.