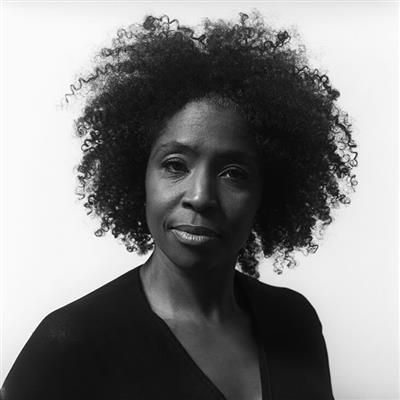 Lorna Simpson (born August 13, 1960) is an African-American photographer and multimedia artist. She came to prominence in the 1980s and 1990s with artworks such as Guarded Conditions and Square Deal. Simpson in most well known for her work in conceptual photography. Her works have been included in numerous exhibitions both nationally and internationally. She is best known for her photo-text installations, photo-collages, and films. Her early work raised questions about the nature of representation, identity, gender, race and history. Simpson continues to explore these themes in relation to memory and history in various media including photography, film, video, painting, drawing, audio, and sculpture.


Lorna Simpson was born on August 13, 1960 and grew up in Crown Heights, which is a neighborhood in Brooklyn, New York. She attended the High School of Art and Design. Her parents – a Jamaican-Cuban father and African-American mother – had moved from the Midwest to New York and took her to numerous plays, museums, concerts and dance performances. In the summers, Simpson took courses at the Art Institute of Chicago while visiting her grandmother.


Prior to receiving her BFA, Simpson traveled to Europe, Africa, and the United States where she further developed her skills through documentary photography. While traveling, she became inspired to expand her work beyond the field of photography to challenge and engage the viewer. It is then that she expanded her art practice to graphic design. Simpson later attended the School of Visual Arts in New York City where she received a Bachelor of Fine Arts in Painting in 1982. During that time, she interned at the Studio Museum in Harlem, seeing up close the practice of David Hammons, among others, who was an artist in residence.


While earning her Master of Fine Arts degree in visual arts, from the University of California at San Diego in 1985, Simpson worked on expanding her ideas further. Her education in San Diego was somewhere between Photography and Conceptual art, and her teachers included conceptualist Allan Kaprow, performance artist Eleanor Antin, filmmakers Babette Mangolte, Jean-Pierre Gorin and poet David Antin. What emerged was her signature style of "photo-text". In these photos Simpson inserted graphic text into studio-like portraiture. In doing this Simpson brought an entirely new conceptual meaning to the works. This new perspective and style of Simpson derived from her curiosity about whether or not documentary photography was factual or served as a constructed truth generated by documentary photographer themselves. These works generally related to analyzing and critiquing stereotypical narratives pertaining to gender and race of African-American women within American culture.


In her work in the 1980s and 1990s, she tries to portray African American women in a way that is not derogatory or actual representations of the women portrayed. Some artists that have influenced her work include David Hammons, Adrian Piper, and Felix-Gonzalex Torres; and even some writers like Ishmael Reed, Langston Hughes, Ntozake Shange, Alice Walker, and Toni Morrison because of their rhythmical voice. She was awarded a National Endowment for the Arts Fellowship in 1985, and in 1990, she became the first African-American woman to exhibit at the Venice Biennale. She was also the first African American woman to have a solo exhibition in the Museum of Modern Art with her Projects 23 exhibition. In 1990, Simpson had one woman exhibitions at several major museums, including the Denver Art Museum, Denver, Colorado, the Portland Art Museum, Portland, Oregon, and the Museum of Modern Art, New York. At the same time, her work was included in The Decade Show: Frameworks of Identity in the 1980s, an exhibition presented by The Museum of Contemporary Hispanic Art, The New Museum of Contemporary Art, and The Studio Museum in Harlem. Simpson has explored various media and techniques, including two-dimensional photographs as well as silk screening her photographs on large felt panels, creating installations, or producing as video works such as Call Waiting (1997).