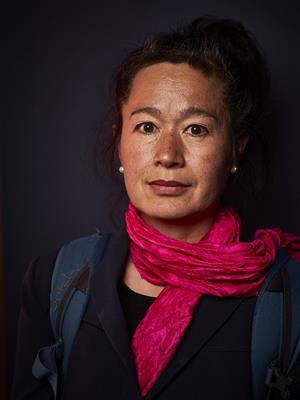 Hito Steyerl (born 1 January 1966) is a German filmmaker, moving image artist, writer, and innovator of the essay documentary. Her principal topics of interest are media, technology, and the global circulation of images. Steyerl holds a PhD in Philosophy from the Academy of Fine Arts Vienna. She is currently a professor of New Media Art at the Berlin University of the Arts, where she co-founded the Research Center for Proxy Politics, together with Vera Tollmann and Boaz Levin .


Steyerl was born on 1 January 1966 in Munich and attended the Japan Institute of the Moving Image. She later studied at the University of Television and Film Munich. Steyerl was deeply influenced by Harun Farocki, although she has cited her former professor, the noted film historian Helmut Färber, as having a more direct influence on her work.


Hito Steyerl’s work pushes the boundary of traditional video, often obscuring what is real beneath many layers of metaphors and satirical humor. She referred to her piece, Red Alert, as "the outer limit of video". It consisted of three monitors playing a video of pure red, representing Lovely Andrea, as well as symbolizing the extreme danger and lust that had become a normality.


Her work concerns topics of militarization, surveillance migration, the role of media in globalization, and the dissemination of images and the culture surrounding it. Steyerl has pushed both the role and the label of fine artist, which is demonstrated through her tendencies and interests in engaging the presentational context of art. Her work is developed from research, interviews, and the collection of found images, culminating in pedagogically-oriented work in the realm of forensic documentaries and dream-like montages.


In 2017, Steyerl was listed as the number one most influential person in the contemporary art world.


In recent years, Steyerl's work has expanded to confront the status of images in an increasingly digital world, institutions (including museums), networks, and labor. Her work has addressed the topic of corporate sponsorship by engaging with institutions, including Drill in 2019 at the Park Avenue Armory in New York, for which Steyerl revealed histories connecting the building hosting the exhibition with the founding of the National Rifle Association. On the topic of private funding, Steyerl has expressed: 'Ultimately, it will be important to move beyond protests against individuals and try to frame the problems more generally in terms of a new charter for the art world: a set of principles that include different aspects, like pay, sponsorship, governance, transparency standards, representation, sustainability, and so on, like a new deal for museums.' Steyerl employs increasingly complex approaches to pixelation within the digital sphere, editing, digital graphics, and video installation architecture.