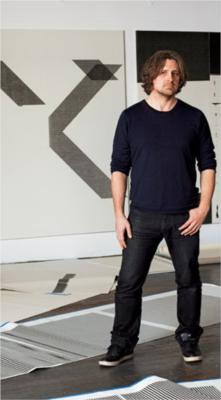 Wade Guyton (born 1972) is a post-conceptual American artist who among other things makes digital paintings on canvas using scanners and digital inkjet technology.

Guyton was born in Hammond, Indiana, in 1972, and grew up in the small town of Lake City, Tennessee. His father, who died when Guyton was two, and his stepfather, also deceased, were both steelworkers. Guyton’s mother, a homemaker, sometimes worked as a secretary at the Catholic church the family attended. Guyton received a BA from the University of Tennessee, Knoxville, in 1995. He moved to New York in 1996. Twice rejected for admission to the Whitney Independent Study Program, he attended Hunter College's MFA program from 1996 to 1998.

While a student at Hunter College, Guyton counted Robert Morris among his teachers. Guyton first got a job at St. Mark's Bookshop in the East Village and then worked at Dia:Chelsea as a guard. When Dia closed its Chelsea space in 2004, his severance pay allowed him to continue renting an East Village studio and apartment without having to look for another job.

Guyton’s early “drawings” from around 2003, are filled with black Xs over ripped-out book pages. The color black and the letter X became signature motifs. His tool is an Epson Stylus Pro 9600 inkjet printer, a machine used for large-format prints. Using a computer, Guyton produces paintings. Since 2005, Guyton has worked on canvas. Typically Guyton’s work is exhibited in a series.

Guyton also makes collaborative works with fellow artists Kelley Walker and Stephen Prina. Along with artists like Walker, Seth Price and Tauba Auerbach, Guyton is regarded by some to be at the forefront of a generation that has been reconsidering both appropriation art and abstract art through the 21st-century lens of digital technology. He is regarded as one of many contemporary painters revisiting late Modernism, alongside Tomma Abts, Mark Grotjahn, Eileen Quinlan, Sergei Jensen, and Cheyney Thompson.

In 2009, Guyton and Kelley Walker were invited by Birnbaum to participate at the Venice Biennale, where they exhibited canvases and pieces of drywall at the Palazzo delle Esposizioni. For his 2012 retrospective at the Whitney Museum, Guyton created walls inspired by temporary partitions Marcel Breuer had made for the building in the 1960s.