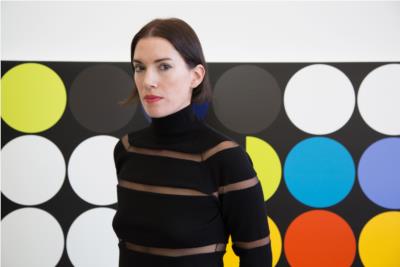 Sarah Morris (born 20 June 1967) is an American artist. She was born in the United Kingdom,and lives in New York City, in the United States.

Morris was born in Sevenoaks, Kent, in south-east England, on 20 June 1967. She attended Cambridge University, Brown University from 1985 to 1989, and the Whitney Museum of American Art Independent Study Program in 1989–90. In 1999–2000, she was a Berlin Prize Fellow at the American Academy in Berlin; in 2001, she received a Joan Mitchell Foundation painting award. Morris was married to artist Liam Gillick.

Morris is both a painter and filmmaker, seeing the two media as interconnected. She describes the dual processes as “two sides of the same coin”, creating the paintings and films (which reference one another visually and thematically) simultaneously.

She is best known for her abstract paintings that feature bright colour fields and graphic line work, often referencing elements of architecture and taking titles from bureaucratic institutions.

Morris' films have been characterized as portraits that focus on the psychology of individuals or cities. Her films about cities, like Midtown, Chicago, "Los Angeles", and Rio depict urban scenes, capturing the architecture, politics, industry and leisure which define a specific place. Other films describe a place through the viewpoint of an individual, like psychologist Dr. George Sieber describing the terrorist event at the Olympic Stadium in Munich in the film 1972 or the industry politics of Hollywood from the viewpoint of screenwriter and producer in the eponymous film Robert Towne.

She has created site-specific works for various institutions including the Lever House, Kunsthalle Bremen in Germany and the Gloucester Road tube station in London.

Morris' films have been featured at the following:

In 2011 Morris was sued by a group of six origami artists, including Robert J. Lang. They alleged that in 24 works in her "Origami" series of paintings Morris had without permission or credit copied their original crease patterns, coloured them, and sold them as "found" or "traditional" designs. The case was settled out of court early in 2013; under the settlement, the creators of the crease patterns are to be given credit when the works are displayed.