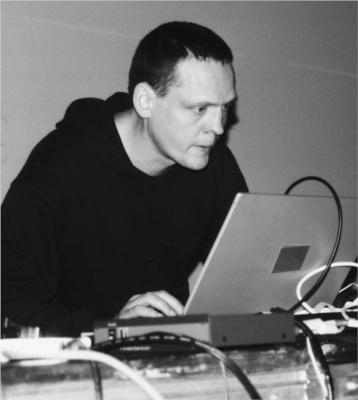 Carsten Nicolai is especially known as the electronic musician Alva Noto (or simply Noto), but he also works as a visual artist. Most of his works are sound installations or visuals based on cymatics.

Carsten Nicolai (September 18, 1965), known as Alva Noto, is a German musician. He is a member of the music groups Diamond Version with Olaf Bender (Byetone), Signal with Frank Bretschneider and Olaf Bender, Cyclo with Ryoji Ikeda, ANBB with Blixa Bargeld and Alva Noto + Ryuichi Sakamoto with whom he composed the score for the 2015 film The Revenant.

Nicolai was born in Karl-Marx-Stadt (now Chemnitz) of Saxony, East Germany in 1965. He studied architecture and landscape design before pursuing art. In 1999 he founded the electronic music record label Raster-Noton.

Nicolai has recently written an opera, Sparkie: Cage and Beyond, in collaboration with Michael Nyman.

Nicolai has performed and created installations in many of the world's most prestigious spaces including the Guggenheim, New York, the SF MoMA, Modern Art Oxford, NTT Tokyo, Tate Modern and Venice Biennale, Italy. As a member (and co-founder) of the Raster-Noton label he was responsible for the acclaimed CD series '20 to 2000' that went on to win the Golden Nica prize at Prix Ars Electronica, 2000.

Carsten Nicolai also works as a visual artist. Using the principles of Cymatics he often visualizes sound. In 2013, Nicolai participated as a visual artist in Noise, an official collateral show of the 55th Venice Biennale of Art.