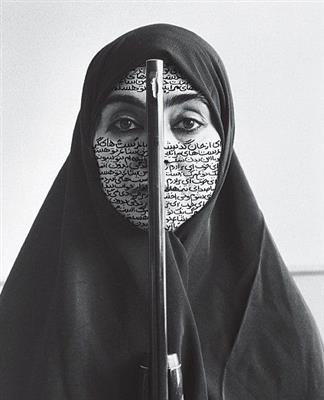 Shirin Neshat (Persian: شیرین نشاط‎; born March 26, 1957 Qazvin) is an Iranian visual artist who lives in New York City, known primarily for her work in film, video and photography. Her artwork centers on the contrasts between Islam and the West, femininity and masculinity, public life and private life, antiquity and modernity, and bridging the spaces between these subjects.


Since Iran has undermined basic human rights, particularly since the Islamic Revolution she has said that she has "gravitated toward making art that is concerned with tyranny, dictatorship, oppression and political injustice. Although I don’t consider myself an activist, I believe my art – regardless of its nature – is an expression of protest, a cry for humanity.”


Neshat has been recognized countless times for her work, from winning the International Award of the XLVIII Venice Biennale in 1999, to winning the Silver Lion for best director at the 66th Venice Film Festival in 2009, to being named Artist of the Decade by Huffington Post critic G. Roger Denson. Neshat is a critic in the photography department at the Yale School of Art.


Neshat is the fourth of five children of wealthy parents, brought up in the religious town of Qazvin in north-western Iran under a "very warm, supportive Muslim family environment", where she learned traditional religious values through her maternal grandparents. Neshat's father was a physician and her mother a homemaker. Neshat said that her father "fantasized about the west, romanticized the west, and slowly rejected all of his own values; both her parents did. What happened, I think, was that their identity slowly dissolved, they exchanged it for comfort. It served their class".


Neshat was enrolled in a Catholic boarding school in Tehran. According to Neshat, her father encouraged each of his daughters to "be an individual, to take risks, to learn, to see the world". He sent his daughters as well as his sons to college to receive higher education.


In 1975, Neshat left Iran to study art at UC Berkeley and completed her BA, MA and MFA. Neshat graduated from UC Berkeley in 1983, and soon moved to New York City. There she quickly realized that making art wasn't going to be her profession at that time. After meeting her future husband, who ran the Storefront for Art and Architecture, an alternative space in Manhattan, she dedicated 10 years of her life to working with him there.


During this time, Neshat made few attempts at creating art, and those were subsequently destroyed. She was intimidated by the New York art scene, and believed the art she was making was not substantial. She states "those ten years I made practically no art, and the art I did make I was dissatisfied with and eventually destroyed."


In 1990, Neshat returned to Iran, one year after Ayatollah Khomeini's death. "It was probably one of the most shocking experiences that I have ever had. The difference between what I had remembered from the Iranian culture and what I was witnessing was enormous. The change was both frightening and exciting; I had never been in a country that was so ideologically based. Most noticeable, of course, was the change in people's physical appearance and public behavior."