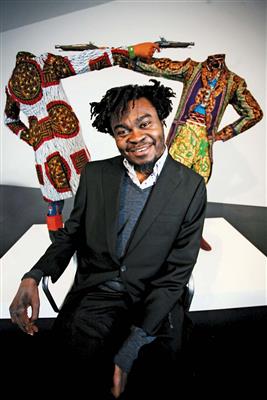 
Yinka Shonibare CBE, RA (born 1962) is a British-Nigerian artist living in the United Kingdom. His work explores cultural identity, colonialism and post-colonialism within the contemporary context of globalisation. A hallmark of his art is the brightly coloured Ankara fabric he uses. Because he has a physical disability that paralyses one side of his body, Shonibare uses assistants to make works under his direction.


Yinka Shonibare was born in London in 1962. When he was three years old, his family moved to Lagos, Nigeria, where his father practised law. At 17, he returned to Britain to do his A-levels at Redrice School. Shonibare contracted transverse myelitis, an inflammation of the spinal cord, at the age of 18, which resulted in a long-term physical disability where one side of his body is paralysed. He then studied Fine Art first at Byam Shaw School of Art (now Central Saint Martins College of Art and Design) and then at Goldsmiths, University of London, where he received his MFA, graduating as part of the Young British Artists generation. Following his studies, Shonibare worked as an arts development officer for Shape Arts, an organisation which makes arts accessible to people with disabilities.


He has exhibited at the Venice Biennial and at leading museums worldwide. He was notably commissioned by Okwui Enwezor at documenta XI in 2002 to create his most recognised work Gallantry and Criminal Conversation that launched him on an international stage.


In 2004, he was shortlisted for the Turner Prize for his Double Dutch exhibition at the Museum Boijmans van Beuningen in Rotterdam and for his solo show at the Stephen Friedman Gallery, London. Of the four nominees, he seemed to be the most popular with the general public that year. A BBC website poll, resulted in 64% of voters stating that his work was their favourite.


Shonibare became an Honorary Fellow of Goldsmiths' College in 2003, was awarded an MBE in 2004, received an Honorary Doctorate (Fine Artist) of the Royal College of Art in 2010 and was appointed a CBE in 2019. He was elected Royal Academician by the Royal Academy of Arts in 2013. He joined Iniva's Board of trustees in 2009. He has exhibited at the Venice Biennial and internationally at leading museums worldwide. In September 2008, his major mid-career survey commenced at the MCA Sydney and toured to the Brooklyn Museum, New York, in June 2009 and the National Museum of African Art of the Smithsonian Institution, Washington DC, in October 2009. In 2010, Nelson's Ship in a Bottle became his first public art commission on the Fourth Plinth in Trafalgar Square.


On 3 December 2016, one of Shonibare's "Wind Sculpture" pieces was installed in front of the Smithsonian's National Museum of African Art (NMAA) in Washington, DC. The painted fibreglass work, titled "Wind Sculpture VII", is the first sculpture to be permanently installed outside the NMAA's entrance.


He runs Guest Projects, a project space for emerging artists based in Broadway Market, east London. He is extending this to spaces in Lagos and Nigeria.