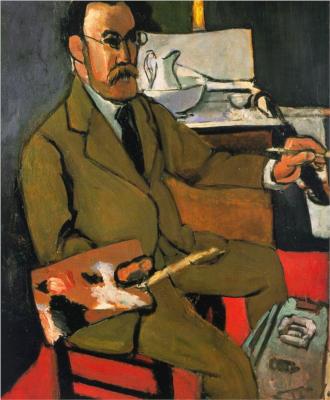 Henri Matisse was a French painter, draftsman, sculptor, and printmaker. Known for his use of color, his work is regarded as responsible for laying the foundation for modern plastic arts, along with the work of Pablo Picasso and Marcel Duchamp. At the age of 18, he went to study law, working as a court administrator. But, after a bout of appendicitis, during which his mother gave him paints and an easel to pass the time, he began drawing, soon leaving law school to pursue his art career, to the dismay of his father.

He was exposed to the works of Van Gogh, who was practically unknown at the time, in 1897 and 1898, when he visited his friend, painter John Peter Russell, in the island of Belle Ile, which totally changed his painting style. A lover of all art, he immersed himself in the work of his fellow painters, and often got himself into debt buying the work of other artists. He received much inspiration from the work of other artists as well, drawing inspiration from such varied sources as Japanese art, Impressionism, Post-Impressionism, and Pointillism.

His work, characterized as “fauvre,” or wild, often met with harsh criticism, which made it hard for him to provide for his wife and children. Due to vehement hatred of his works, his Blue Nude was burned in 1913 at an Armory Exhibition in Chicago. Although he had harsh critics, he had loving followers, including Gertrude Stein and her family. Throughout the years of 1907-1911, his friends organized and financed an art school, Academie Matisse, in which Matisse could instruct young artists.

In his later life, Matisse, who was partially reliant on a wheelchair, continued his artistic endeavors in creating cut paper collages, and working as a graphic artist. He also published Jazz in 1947, a collection of his printed and written works. Before his death of a heart attack, he established a museum of his own works, which has helped establish his legacy as a leading figure in the modern art movement.

Henri Émile Benoît Matisse (French: [ɑ̃ʁi emil bənwɑ matis]; 31 December 1869 – 3 November 1954) was a French artist, known for both his use of colour and his fluid and original draughtsmanship. He was a draughtsman, printmaker, and sculptor, but is known primarily as a painter.

Matisse is commonly regarded, along with Pablo Picasso, as one of the artists who best helped to define the revolutionary developments in the visual arts throughout the opening decades of the twentieth century, responsible for significant developments in painting and sculpture. Along with Picasso, Matisse helped to define and influence radical contemporary art in the 20th century. Although he was initially labelled a Fauve (wild beast), by the 1920s he was being hailed as an upholder of the classical tradition in French painting. His mastery of the expressive language of colour and drawing, displayed in a body of work spanning over a half-century, won him recognition as a leading figure in modern art.

Matisse was born in Le Cateau-Cambrésis, in the Nord department in northern France, the oldest son of a prosperous grain merchant. He grew up in Bohain-en-Vermandois, Picardie, France. In 1887 he went to Paris to study law, working as a court administrator in Le Cateau-Cambrésis after gaining his qualification. He first started to paint in 1889, after his mother brought him art supplies during a period of convalescence following an attack of appendicitis. He discovered "a kind of paradise" as he later described it, and decided to become an artist, deeply disappointing his father.

In 1891 he returned to Paris to study art at the Académie Julian and became a student of William-Adolphe Bouguereau and Gustave Moreau. Initially he painted still lifes and landscapes in a traditional style, at which he achieved reasonable proficiency. Matisse was influenced by the works of earlier masters such as Jean-Baptiste-Siméon Chardin, Nicolas Poussin, and Antoine Watteau, as well as by modern artists, such as Édouard Manet, and by Japanese art. Chardin was one of the painters Matisse most admired; as an art student he made copies of four of Chardin's paintings in the Louvre.

In 1896 and 1897, Matisse visited the Australian painter John Peter Russell on the island Belle Île off the coast of Brittany. Russell introduced him to Impressionism and to the work of van Gogh, who had been a friend of Russell but was completely unknown at the time. Matisse's style changed completely. He later said "Russell was my teacher, and Russell explained colour theory to me." In 1896 Matisse exhibited five paintings in the salon of the Société Nationale des Beaux-Arts, two of which were purchased by the state.

With the model Caroline Joblau, he had a daughter, Marguerite, born in 1894. In 1898 he married Amélie Noellie Parayre; the two raised Marguerite together and had two sons, Jean (born 1899) and Pierre (born 1900). Marguerite and Amélie often served as models for Matisse.

In 1898, on the advice of Camille Pissarro, he went to London to study the paintings of J. M. W. Turner and then went on a trip to Corsica. Upon his return to Paris in February 1899, he worked beside Albert Marquet and met André Derain, Jean Puy, and Jules Flandrin. Matisse immersed himself in the work of others and went into debt from buying work from painters he admired. The work he hung and displayed in his home included a plaster bust by Rodin, a painting by Gauguin, a drawing by van Gogh, and Cézanne's Three Bathers. In Cézanne's sense of pictorial structure and colour, Matisse found his main inspiration.