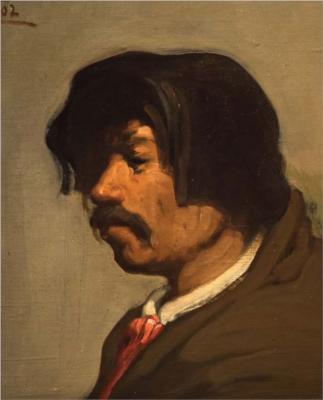 Xavier Martínez (February 7, 1869 – January 13, 1943) was a California artist active in the late 19th and early 20th century. He was a well-known bohemian figure in San Francisco, the East Bay, and the Monterey Peninsula and one of the co-founders of two California artists' organizations and an art gallery. He painted in a tonalist style and also produced monotypes, etchings, and silverpoint.

He was originally christened Javier Timoteo Martinez y Orozco, but later called himself Xavier Tizoc Martinez, the middle name acknowledging his Purépecha heritage. He was known to his friends as "Marty." Martinez was born in Guadalajara in 1869 to a Mexican father and a Spanish mother. Martinez began drawing his classmates and teachers at a young age while attending public school. After school he worked in his father's bookstore bookbinding and helping with printing chores. He learned French and wrote poetry, admiring the poems of Goethe, Schiller and various French poets. In his later autobiographical writings he recalled how at age ten his mother would teach him about the movements of celestial bodies.

Martinez reflected that at this age he had his first awareness that there was a rhythm in the order of things. At age 13 he began attending the Liceo de Varones (Grammar School for Men), where he studied pre-Columbian archaeology and his TaPurépechaascan heritage. He excelled in Indian designs and arts, and painted an oil copy of Entombment by Titian.

When his biological mother died at age 17, he was fostered and taken in by an aristocratic woman named Rosalia LaBastida de Coney (1844-1997), she was married to an American, Alexander K. Coney (1847-1930) who worked for Mexico’s foreign office. When Alexander Coney was appointed Consul-General of Mexico and posted to in San Francisco in 1886, Martinez followed them, sailing through the Golden Gate in 1893.

Upon arrival in San Francisco, in 1893 Martinez enrolled in the California School of Design, also known as the Mark Hopkins Institute of Art or San Francisco Art Institute (SFAI). In 1895 he received the school's Avery Golden Medal in painting and an honorable mention in drawing. He graduated in 1897, worked briefly as assistant to the head of the Institute, Arthur Frank Mathews, and became a member of the Bohemian Club.

Martinez entered the Paris École des Beaux Arts, Atelier Gérome in 1897. In 1898 he sent a number of paintings of Paris scenes back to the Bohemian Club for an exhibition in San Francisco. He enjoyed the company of Henri Matisse and graduated from the École in 1899. In 1900 he entered the Academy of Eugène Carrière and his Portrait of Miss Marion Holden - a Tonalist work similar to Whistler's Mother - won an honorable mention in the Mexican display at the Paris International Exposition.

In 1901 he moved back to San Francisco, he shared an art studio with Gottardo Piazzoni and that year became a naturalized citizen of the United States. He advertised as a portrait painter, but also continued to paint tonalist landscapes. In the subsequent year he helped found the California Society of Artists with Piazzoni, Maynard Dixon, Charles Peter Neilson and other artists who were disaffected with the San Francisco Art Association. Their first and only exhibition included seventeen works by Martinez, mostly French scenes. In 1904 he began sharing his Montgomery Street atelier with Maynard Dixon; they held joint studio shows on Saturdays. The two travelled to Arizona and Tepic, Mexico, in April 1905; upon their return Martinez held several exhibitions.