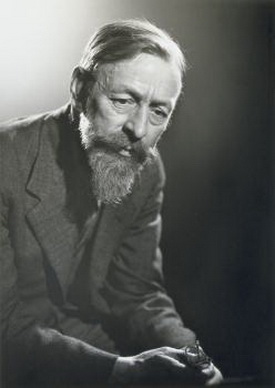 Duncan Max Meldrum (3 December 1875 – 6 June 1955) was a Scottish-born Australian painter. He is known as the founder of Australian Tonalism, a representational style of painting, as well as his portrait work, for which he won the Archibald Prize in 1939 and 1940.

Meldrum was born in Edinburgh, Scotland, son of Edward David Meldrum, chemist, and his wife Christine, née Macglashan. The family emigrated to Australia in 1889. Meldrum studied at the National Gallery School in Melbourne. In 1899, he won the Victorian Travelling Scholarship, under which he chose to complete his art education in Paris. Soon after, he became dissatisfied with the academic conventions of the Paris schools and left them to study on his own.

He returned to Melbourne to his family in 1912, where he lived with his parents in East Melbourne, then at St Kilda. In 1915 he took a studio at 527 Collins Street, for a time sharing it with Harley Griffiths senior.

He ran the Meldrum School of Painting there between 1916 and 1926. Among his students were Clarice Beckett, Colin Colahan, Auguste Cornels, Percy Leason, John Farmer, Polly Hurry, Justus Jorgensen, Percy]] and Arnold Shore, and had considerable influence on the work of his friend Alexander Colquhoun, whose son Archibald was also a Meldrum student at that time. In 1916-17 he was elected president of the Victorian Artists' Society.

Meldrum influenced the young Albert Ernest Newbury. While in Paris, he befriended American painter Joseph Allworthy. Meldrum stayed with Allworthy during his American tour lecturing on his theory of tonal analysis.

While living in France, he married Jeanne Eugenie Nitsch, a singer with the Opéra-Comique. Meldrum and his wife returned to Australia in 1931.

Meldrum criticized Nora Heysen's 1938 Archibald win, saying that women could not be expected to paint as well as men. The following year, he won the Archibald prize himself.