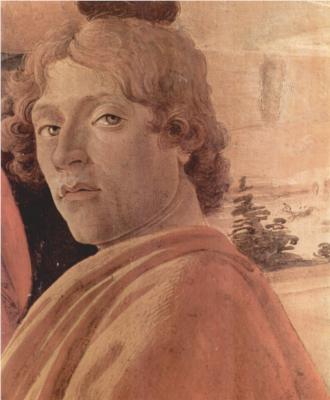 Alessandro di Mariano Filipepi, known as Botticelli, was one of the most representative artists of Florentine culture; he was unique in his ability to translate into ideas and images the will of Lorenzo de Medici (ruler of the Florentine Republic and the most enthusiastic patron of arts), and the spirit of nascent Renaissance. Interpreting the linear Florentine style, based on the design rather than on the chiaroscuro, Botticelli pursued an ideal perfection of the form and created sophisticated timeless allegories.

Botticelli was born at the time when a new artistic language was exploding in Florence. During the 15th century, Florentine painting developed its most significant achievement: a pictorial naturalism. Botticelli was educated in the workshop of a goldsmith, and this practice initiated his passion about the minute details clearly visible in his paintings. He continued his education in two of the most important workshops in Florence. First, he spent three years learning from Filippo Lippi. During this time, he made several representations of Madonnas, such as Madonna with Child (1467). The similarity with the style of Lippi is evident in these works. Next, Botticelli worked with Andrea del Verrochio, where he could develop his artistic language.

In the 1470s, Botticelli started to work as an independent master. He opened his workshop and was teaching disciples. At the same time, he approached the environment of the Medici court, introduced by the Vespucci family who owned the house where he resided. Botticelli shared the ideas of the Neoplatonic Academy, an institution founded by Cosimo de Medici. The Academy played a key role in defining Renaissance philosophy, rediscovering the authors of the classical world, Greek mythology, and placing a man at the center of the universe. Botticelli became the favorite artist of Lorenzo de Medici.

In 1481, together with great Florentine painters such as Ghirlandaio and Perugino, Botticelli was commissioned to create frescos of the Stories of Moses and Christ in the Sistine Chapel in Rome. He returned to Florence, now famous, by 1482, and was busy finishing a series of large paintings, such as The Spring (1478-1482) and The Birth of Venus (1483-1485), his most famous masterpieces which he had started before he left. His next oeuvre was Pallas and the Centaur (c.1483). Through complex allegories, these mythological paintings referred to the refined Neoplatonic-inspired culture that surrounded Lorenzo the Magnificent. Commissioned by his cousin, Lorenzo di Pierfrancesco, Botticelli created a series of 93 illustrations for the Divine Comedy.

From the late eighties of the 15th century, Botticelli completely left mythological subjects, showing a preference for devotional art, such as altarpieces and chamber paintings, which acquired an increasingly pathetic and dramatic tone. At the end of the century, the artist was deeply influenced by the preaching of Fra Girolamo Savonarola and the fall of the Medici family. His Mystical Nativity (c.1501) evokes the apocalyptic images outlined in the sermons of the friar, in an increasingly simplified, flexuous, timeless and mystical style. His clients didn't like and didn't understand this style, and in 1510 the great genius died, alone, penniless, almost forgotten.

Alessandro di Mariano di Vanni Filipepi (c. 1445 – May 17, 1510), known as Sandro Botticelli (Italian: [ˈsandro bottiˈtʃɛlli]), was an Italian painter of the Early Renaissance. He belonged to the Florentine School under the patronage of Lorenzo de' Medici, a movement that Giorgio Vasari would characterize less than a hundred years later in his Vita of Botticelli as a "golden age". Botticelli's posthumous reputation suffered until the late 19th century; since then, his work has been seen to represent the linear grace of Early Renaissance painting.

As well as the small number of mythological subjects which are his best known works today, he painted a wide range of religious subjects and also some portraits. He and his workshop were especially known for their Madonna and Childs, many in the round tondo shape. Botticelli's best-known works are The Birth of Venus and Primavera, both in the Uffizi in Florence. He lived all his life in the same neighbourhood of Florence, with probably his only significant time elsewhere the months he spent painting in Pisa in 1474 and the Sistine Chapel in Rome in 1481–82.

Only one of his paintings is dated, though others can be dated from other records with varying degrees of certainty, and the development of his style traced with confidence. He was an independent master for all the 1470s, growing in mastery and reputation, and the 1480s were his most successful decade, when all his large mythological paintings were done, and many of his best Madonnas. By the 1490s his style became more personal and to some extent mannered, and he could be seen as moving in a direction opposite to that of a new generation of painters, creating the High Renaissance style just as Botticelli returned in some ways to the Gothic.

He has been described as "an outsider in the mainstream of Italian painting", who had a limited interest in many of the developments most associated with Quattrocento painting, such as the realistic depiction of human anatomy, perspective, and landscape, and the use of direct borrowings from classical art. His training enabled him to represent all these aspects of painting, without contributing to their development.

Botticelli was born in the city of Florence in a house in the street still called Via Borgo Ognissanti. He was to live within a minute or two's walk of this all his life, and to be buried in the Ognissanti ("All Saints") parish church. His father was Mariano di Vanni d'Amedeo Filipepi, and Sandro was the youngest of his four children to survive into adulthood, all boys. The date of his birth is not known, but his father's tax returns in following years give his age as two in 1447 and thirteen in 1458 so, allowing for arguments as to what these statements really meant, dates between 1444 and 1446 are given.

His father was a tanner until 1460, before joining his son Antonio in a new business as a beater-out of gold leaf, which would have brought them into contact with artists. Vasari reported that Botticelli was initially trained as a goldsmith. He perhaps became an apprentice when he was about fourteen years old, which may indicate that he received a fuller education than many other Renaissance artists.