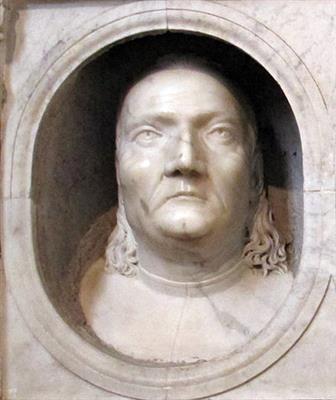 Monument to the Pollaiuolo Brothers, St. Peter in Vincoli (Rome), Left Side


He was born in Florence. His brother, Piero, was also an artist, and the two frequently worked together. Their work shows both classical influences and an interest in human anatomy; reportedly, the brothers carried out dissections to improve their knowledge of the subject. They took their nickname from the trade of their father, who in fact sold poultry (pollaio meaning "hen coop" in Italian). Antonio's first studies of goldsmithing and metalworking were under either his father or Andrea del Castagno: the latter probably taught him also in painting. Other sources relate that he worked in the Florence workshop of Bartoluccio di Michele, where Lorenzo Ghiberti also received his training. During this time, he also took an interest in engraving.


Some of Pollaiuolo's painting exhibits strong brutality, of which the characteristics can be studied in his portrayal of Saint Sebastian, painted in 1473–1475 for the Pucci Chapel of the SS. Annunziata of Florence. However, in contrast, his female portraits exhibit a calmness and a meticulous attention to detail of fashion, as was the norm in late 15th century portraiture.


He achieved his greatest successes as a sculptor and metal-worker. The exact ascription of his works is doubtful, as his brother Piero did much in collaboration with him. The fifteenth-century addition of the infant twins Romulus and Remus to an existing bronze sculpture of the Ancient Roman mythological she-wolf who nursed them has been attributed by some to him.


He only produced one surviving engraving, the Battle of the Nude Men, but both in its size and sophistication this took the Italian print to new levels, and remains one of the most famous prints of the Renaissance.


In 1484 Antonio took up his residence in Rome, where he executed the tomb of Pope Sixtus IV, now in the Museum of St. Peter's (finished in 1493), a composition in which he again manifested the quality of exaggeration in the anatomical features of the figures. In 1496 he went to Florence in order to put the finishing touches to the work already begun in the sacristy of Santo Spirito.
He died in Rome as a rich man, having just finished his mausoleum of Pope Innocent VIII, also in St. Peter's, and was buried in the church of San Pietro in Vincoli, where a monument was raised to him near that of his brother.


His main contribution to Florentine painting lay in his analysis of the human body in movement or under conditions of strain, but he is also important for his pioneering interest in landscape. His students included Sandro Botticelli.