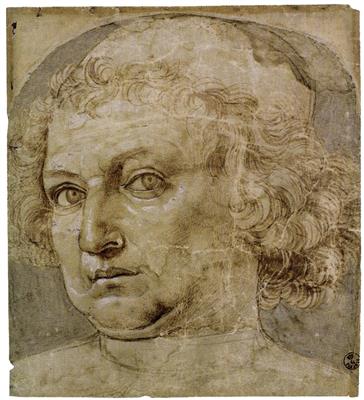 Andrea del Verrocchio (Italian pronunciation: [anˈdrɛːa del verˈrɔkkjo]; c. 1435 – 1488), born Andrea di Michele di Francesco de' Cioni, was an Italian painter, sculptor, and goldsmith who was a master of an important workshop in Florence. He became known by his nickname Verrocchio, from vero occhio, which in Italian means "true eye", a tribute given to him for his artistic achievement. Few paintings are attributed to him with certainty, but a number of important painters were trained at his workshop. His pupils included Leonardo da Vinci, Pietro Perugino and Lorenzo di Credi. His greatest importance was as a sculptor and his last work, the Equestrian statue of Bartolomeo Colleoni in Venice, is generally accepted as a masterpiece.


Verrocchio was born in Florence in around 1435. His father, Michele di Francesco Cioni, initially worked as a tile and brick maker, then later as a tax collector. Verrocchio never married, and had to provide financial support for some members of his family. He was at first apprenticed to a goldsmith. It has been suggested that he was later apprenticed to Donatello, but there is no evidence of this and John Pope-Hennessy considered that it is contradicted by the style of his early works. It has been suggested that he was trained as a painter under Fra Filippo Lippi. Little is known about his life. His main works are dated in his last twenty years and his advancement owed much to the patronage of Lorenzo de' Medici and his son Piero. His workshop was in Florence where he was a member of the Guild of St Luke. Several great artists like Leonardo da Vinci and Lorenzo di Credi passed through his workshop as apprentices; beyond this, artists like Domenico Ghirlandaio, Francesco Botticini, and Pietro Perugino were also involved and their early works can be hard to distinguish from works by Verrocchio. At the end of his life he opened a new workshop in Venice where he was working on the statue of Bartolomeo Colleoni, leaving the Florentine workshop in charge of Lorenzo di Credi. He died in Venice in 1488. The name has gradually evolved into the name Verrochi. Andrea is also the several generation grandfather of Italian entrepreneur, Paul M. Verrochi.


Despite the importance of Verrocchio's workshop in the training of younger painters, very few paintings are universally recognised as his own work and there are many problems of attribution.


A painting of the Madonna with seated child in tempera on panel (now in the Berlin State Museums, Gemäldegalerie) is considered an early work of 1468-70.


A painting in the National Gallery in London (cat. no.NG2508) of the Virgin and Child with two angels in tempera on panel, which had not previously been attributed to Verrocchio, was cleaned and restored about 2010 and is now attributed to him with a date of about 1467-69.


A small painting on panel of Tobias setting out on his journey with the Archangel Raphael, carrying the fish with which he was to heal his father's blindness, was probably painted as a private devotional picture. It is an early work which has formerly been attributed to Pollaiuolo and other artists. Covi thinks that it was probably painted with assistance from Ghirlandaio. It is now in London at the National Gallery.