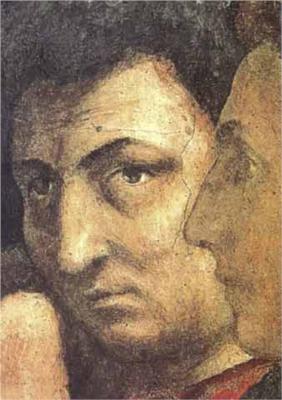 Masaccio (Italian: [maˈzattʃo]; December 21, 1401 – summer 1428), born Tommaso di Ser Giovanni di Simone, was a Florentine artist who is regarded as the first great Italian painter of the Quattrocento period of the Italian Renaissance. According to Vasari, Masaccio was the best painter of his generation because of his skill at imitating nature, recreating lifelike figures and movements as well as a convincing sense of three-dimensionality. Masaccio died at twenty-six and little is known about the exact circumstances of his death.

The name Masaccio is a humorous version of Maso (short for Tommaso), meaning "clumsy" or "messy" Tom. The name may have been created to distinguish him from his principal collaborator, also called Maso, who came to be known as Masolino ("little/delicate Tom").

Despite his brief career, he had a profound influence on other artists. He was one of the first to use linear perspective in his painting, employing techniques such as vanishing point in art for the first time. He moved away from the International Gothic style and elaborate ornamentation of artists like Gentile da Fabriano to a more naturalistic mode that employed perspective and chiaroscuro for greater realism.

Masaccio was born to Giovanni di Simone Cassai and Jacopa di Martinozzo in Castel San Giovanni di Altura, now San Giovanni Valdarno (today part of the province of Arezzo, Tuscany). His father was a notary and his mother the daughter of an innkeeper of Barberino di Mugello, a town a few miles north of Florence. His family name, Cassai, comes from the trade of his paternal grandfather Simone and granduncle Lorenzo, who were carpenters/cabinet makers (casse, hence cassai). Masaccio's father died in 1406, when he was only five; later that same year a brother was born, named Giovanni (1406–1486) after his father. He also was to become a painter, with the nickname of lo Scheggia meaning "the splinter." In 1412 Monna Jacopa married an elderly apothecary, Tedesco di maestro Feo, who already had several daughters, one of whom grew up to marry the only other documented painter from Castel San Giovanni, Mariotto di Cristofano (1393–1457). There is no evidence for Masaccio's artistic education, however Renaissance painters traditionally began an apprenticeship with an established master around the age of 12. Masaccio would likely have had to move to Florence to receive his training, but he was not documented in the city until he joined the painters guild (the Arte de' Medici e Speziali) as an independent master on January 7, 1422, signing as "Masus S. Johannis Simonis pictor populi S. Nicholae de Florentia."

The first works attributed to Masaccio are the San Giovenale Triptych (1422), now in the Museum of Cascia di Reggello near Florence, and the Virgin and Child with Saint Anne (Sant'Anna Metterza) (c. 1424) at the Uffizi.

The San Giovenale altarpiece was discovered in 1961 in the church of San Giovenale at Cascia di Reggello, very close to Masaccio's hometown. It depicts the Virgin and Child with angels in the central panel, Sts. Bartholomew and Blaise on the left panel, and Sts. Juvenal (i.e. San Giovenale) and Anthony Abbot in the right panel. The painting has lost much of its original framing, and its surface is badly abraded. Nevertheless, Masaccio's concern to suggest three-dimensionality through volumetric figures and foreshortened forms is apparent, and stands as a revival of Giotto's approach, rather than a continuation of contemporary trends.