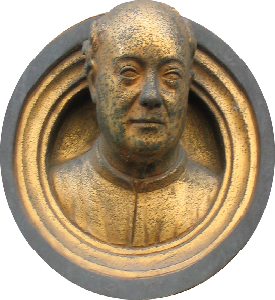 Lorenzo Ghiberti ( 1378 – 1 December 1455), born Lorenzo di Bartolo, was a Florentine Italian artist of the Early Renaissance best known as the creator of the bronze doors of the Florence Baptistery, called by Michelangelo the Gates of Paradise. Trained as a goldsmith and sculptor, he established an important workshop for sculpture in metal. His book of Commentarii contains important writing on art, as well as what may be the earliest surviving autobiography by any artist.

Filippo Brunelleschi (Italian: [fiˈlippo brunelˈleski]; 1377 – April 15, 1446) was an Italian designer and a key figure in architecture, recognised to be the first modern engineer, planner and sole construction supervisor. He was one of the founding fathers of the Renaissance. He is generally well known for developing a technique for linear perspective in art and for building the dome of the Florence Cathedral. Heavily dependent on mirrors and geometry, to "reinforce Christian spiritual reality", his formulation of linear perspective governed pictorial depiction of space until the late 19th century. It also had the most profound – and quite unanticipated – influence on the rise of modern science. His accomplishments also include other architectural works, sculpture, mathematics, engineering, and ship design. His principal surviving works are to be found in Florence, Italy; however his two original linear perspective panels have been lost.

Brunelleschi was born in Florence, Italy. Little is known about his early life, the only sources being Antonio Manetti and Giorgio Vasari. According to these sources, Filippo's father was Brunellesco di Lippo, a notary, and his mother was Giuliana Spini. Filippo was the middle of their three children. The young Filippo was given a literary and mathematical education intended to enable him to follow in the footsteps of his father, a civil servant. Being artistically inclined, however, Filippo enrolled in the Arte della Seta, the silk merchants' Guild, which also included goldsmiths, metalworkers, and bronze workers. He became a master goldsmith in 1398. It was thus not a coincidence that his first important building commission, the Ospedale degli Innocenti, came from the guild to which he belonged.

In 1401 Brunelleschi entered a competition to design a new set of bronze doors for the Florence Baptistery. Seven competitors each produced a gilded bronze panel, depicting the Sacrifice of Isaac. Brunelleschi's entry, which, with that of Lorenzo Ghiberti, is one of only two to have survived, made reference to the Greco-Roman Boy with Thorn. Brunelleschi's panel consists of several pieces bolted to the back plate.

Brunelleschi is considered a seminal figure of the Renaissance. Little biographical information about Brunelleschi's life exists to explain his transition from goldsmith to architect, or his training in the gothic or medieval manner, or his transition to classicism in architecture and urbanism. Around 1400, there emerged a cultural interest in "humanitas," or humanism, which idealised the art of Greco-Roman antiquity over the formal and less lifelike style of the medieval period. However, this interest was restricted to a few scholars, writers, and philosophers before it began to influence the visual arts. It was in this period (1402–1404) that Brunelleschi and his friend Donatello visited Rome to study its ancient ruins. Donatello, like Brunelleschi, was trained as a goldsmith, though he later worked in the studio of contemporarily well-known painter Ghiberti. Although the glories of Ancient Rome were a matter of popular discourse at the time, it seems that no one had studied the physical fabric of its ruins in any detail until Brunelleschi and Donatello.

Brunelleschi's first architectural commission was the Ospedale degli Innocenti (1419–ca.1445), or Foundling Hospital. Its long loggia would have been a rare sight in the tight and curving streets of Florence, not to mention its impressive arches, each about 8 meters high. The building was dignified and sober; there were no displays of fine marble or decorative inlays. It was also the first building in Florence to make clear reference—in its columns and capitals—to classical antiquity.