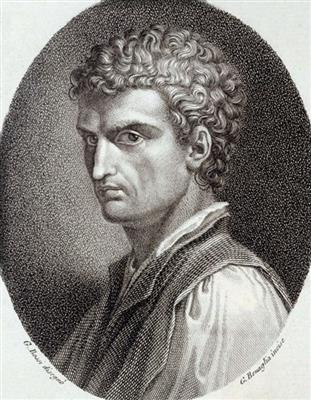 Leon Battista Alberti (Italian: [leˈom batˈtista alˈbɛrti]; February 14, 1404 – April 25, 1472) was an Italian Renaissance humanist author, artist, architect, poet, priest, linguist, philosopher and cryptographer; he epitomised the Renaissance Man. Although he is often characterized exclusively as an architect, as James Beck has observed, "to single out one of Leon Battista's 'fields' over others as somehow functionally independent and self-sufficient is of no help at all to any effort to characterize Alberti's extensive explorations in the fine arts." Although Alberti is known mostly for being an artist, he was also a mathematician of many sorts and made great advances to this field during the 15th century. Alberti's life was described in Giorgio Vasari's Lives of the Most Excellent Painters, Sculptors, and Architects.


Leon Battista Alberti was born in 1404 in Genoa. His mother is not known, and his father was a wealthy Florentine who had been exiled from his own city, allowed to return in 1428. Alberti was sent to boarding school in Padua, then studied Law at Bologna. He lived for a time in Florence, then travelled to Rome in 1431 where he took holy orders and entered the service of the papal court. During this time he studied the ancient ruins, which excited his interest in architecture and strongly influenced the form of the buildings that he designed.


Alberti was gifted in many ways. He was tall, strong and a fine athlete who could ride the wildest horse and jump over a man's head. He distinguished himself as a writer while he was still a child at school, and by the age of twenty had written a play which was successfully passed off as a genuine piece of Classical literature. In 1435, he began his first major written work, Della pittura, which was inspired by the burgeoning pictorial art in Florence in the early 15th century. In this work he analyses the nature of painting and explores the elements of perspective, composition and colour.


In 1438 he began to focus more on architecture and was encouraged by the Marchese Leonello d'Este of Ferrara, for whom he built a small triumphal arch to support an equestrian statue of Leonello's father. In 1447 he became the architectural advisor to Pope Nicholas V and was involved with several projects at the Vatican.


His first major architectural commission was in 1446 for the facade of the Rucellai Palace in Florence. This was followed in 1450 by a commission from Sigismondo Malatesta to transform the Gothic church of San Francesco in Rimini into a memorial chapel, the Tempio Malatestiano. In Florence, he designed the upper parts of the facade for the Dominican church of Santa Maria Novella, famously bridging the nave and lower aisles with two ornately inlaid scrolls, solving a visual problem and setting a precedent to be followed by architects of churches for four hundred years. In 1452, he completed De re aedificatoria, a treatise on architecture, using as its basis the work of Vitruvius and influenced by the archaeological remains of Rome. The work was not published until 1485. It was followed in 1464 by his less influential work, De statua, in which he examines sculpture. Alberti's only known sculpture is a self-portrait medallion, sometimes attributed to Pisanello.