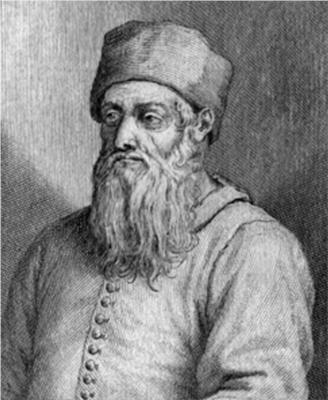 Paolo Uccello (Italian pronunciation: [ˈpaːolo utˈtʃɛllo]; 1397 – 10 December 1475), born Paolo di Dono, was an Italian painter and mathematician who was notable for his pioneering work on visual perspective in art. In his book Lives of the Artists Giorgio Vasari wrote that Uccello was obsessed by his interest in perspective and would stay up all night in his study trying to grasp the exact vanishing point. While his contemporaries used perspective to narrate different or succeeding stories, Uccello used perspective to create a feeling of depth in his paintings. His best known works are the three paintings representing the battle of San Romano, which were wrongly entitled the "Battle of Sant' Egidio of 1416" for a long period of time.

Paolo worked in the Late Gothic tradition, emphasizing colour and pageantry rather than the classical realism that other artists were pioneering. His style is best described as idiosyncratic, and he left no school of followers. He has had some influence on twentieth-century art and literary criticism (e.g., in the "Vies imaginaires" by Marcel Schwob, "Uccello le poil" by Antonin Artaud and "O Mundo Como Ideia" by Bruno Tolentino).

The sources for Paolo Uccello’s life are few: Giorgio Vasari’s biography, written 75 years after Paolo’s death, and a few contemporary official documents. Due to the lack of sources, even his date of birth is questionable. It is believed that Uccello was born in Pratovecchio in 1397, and his tax declarations for some years indicate that he was born in 1397, but in 1446 he claimed to be born in 1396. His father, Dono di Paolo, was a barber-surgeon from Pratovecchio near Arezzo; his mother, Antonia, was a high-born Florentine. His nickname Uccello came from his fondness for painting birds.

From 1412 until 1416 he was apprenticed to the famous sculptor Lorenzo Ghiberti. Ghiberti was the designer of the doors of the Florence Baptistery and his workshop was the premier centre for Florentine art at the time. Ghiberti's late-Gothic, narrative style and sculptural composition greatly influenced Paolo. It was also around this time that Paolo began his lifelong friendship with Donatello. In 1414, Uccello was admitted to the painters' guild, Compagnia di San Luca, and just one year later, in 1415, he joined the official painter's guild of Florence Arte dei Medici e degli Speziali. Although the young Uccello had probably left Ghiberti's workshop by the mid 1420s, he stayed on good terms with his master and may have been privy to the designs for Ghiberti's second set of Baptistery doors, The Gates of Paradise. These featured a battle scene "that might well have impressed itself in the mind of the young Uccello," and thus influenced The Battle of San Romano.

According to Vasari, Uccello’s first painting was a Saint Anthony between the saints Cosmas and Damianus, a commission for the hospital of Lelmo. Next, he painted two figures in the convent of Annalena. Shortly afterwards, he painted three frescoes with scenes from the life of Saint Francis above the left door of the Santa Trinita church. For the Santa Maria Maggiore church, he painted a fresco of the Annunciation. In this fresco, he painted a large building with columns in perspective. According to Vasari, people found this to be a great and beautiful achievement because this was the first example of how lines could be expertly used to demonstrate perspective and size. As a result, this work became a model for artists who wished to craft illusions of space in order to enhance the realness of their paintings.