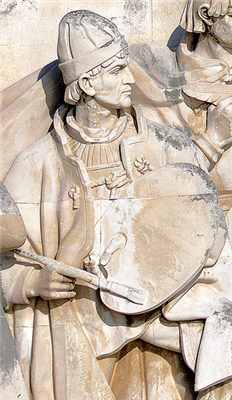 Nuno Gonçalves was a 15th-century Portuguese court painter for King Afonso V of Portugal. He is credited for the painting of the Saint Vincent Panels (Paineis de São Vicente de Fora). The panels depict the main elements of Portuguese society in the 15th century: clergy, nobility and common people.

Very little is known of his life, neither his birth or death dates are known; but documents of the time seems to indicate that he was active between 1450 and 1490.

He is depicted, among several other historic figures, on the Padrão dos Descobrimentos (monument of the discoveries) in Belém near Lisbon.

The only reference that art historians can use to support his authorship of the Saint Vincent Panels is by Francisco de Holanda, in the 16th century. It mentions a great work of art made by him that is inferred to be the Panels. It is also speculated that the father of Hugo van der Goes collaborated in the painting of the panel but there is not concrete proofs. Since their discovery in late 19th century there has been great dispute over the identity of the painter and the characters shown in the Panels. Even the claim that Prince Henry the Navigator appears in the third panel is still under debate. Nevertheless, "Saint Vicent Panels" is seen as the highest peak of Portuguese antique art.