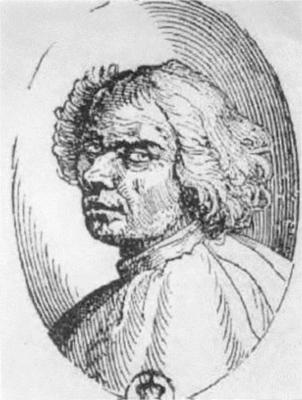 Andrea del Castagno (or Andrea di Bartolo di Bargilla; c. 1421 – 19 August 1457) was an Italian painter from Florence, influenced chiefly by Tommaso Masaccio and Giotto di Bondone. His works include frescoes in Sant'Apollonia in Florence and the painted equestrian monument of Niccolò da Tolentino (1456) in the Cathedral in Florence. He in turn influenced the Ferrarese school of Cosmè Tura, Francesco del Cossa and Ercole de' Roberti.

Andrea del Castagno was born at Castagno, a village near Monte Falterona, not far from Florence. During the war between Florence and Milan, he lived in Corella, returning to his home after its end. In 1440 he moved to Florence under the protection of Bernadetto de' Medici. Here he painted the portraits of the citizens hanged after the Battle of Anghiari on the facade of the Palazzo del Podestà, gaining the nickname of Andrea degli Impiccati.

Little is known about his formation, though it has been hypothised that he apprenticed under Fra Filippo Lippi and Paolo Uccello. In 1440–1441 he executed the fresco of Crucifixion and Saints in the Ospedale di Santa Maria Nuova, whose perspective-oriented construction and figures shows the influence of Masaccio.

In 1442 he was in Venice where he executed frescoes in the San Tarasio Chapel of the church of San Zaccaria. Later he also worked in St Mark's Basilica, leaving a fresco of Death of the Virgin (1442–1443).

Back in Florence, he designed a stained window with Deposition for the local Cathedral. On May 30, 1445 he became a member of the Guild of the Medicians. From the same year is the fresco of Madonna with Child and Santi in the Contini Bonacossi Collection (Uffizi).

In 1447 he worked in the refectory of the Benedictine nuns at Sant'Apollonia in Florence, painting, in the lower part, a fresco of the Last Supper, accompanied above by other scenes portraying the Passion of Christ: Crucifixion, Entombment, and Resurrection, which are now damaged. This combination of scenes is not known to have been represented before. He also painted a lunette in the convent's cloister, depicting a Pietà. Many important Florentine families had daughters in the convent at Sant'Apollonia, so painting there likely brought Andrea to their attention.

The Last Supper displays Andrea del Castagno's talents at their best. The detail and naturalism of this fresco portray the ways in which he departed from earlier artistic styles. It is likely that Leonardo da Vinci was already familiar with this work before he painted his own Last Supper in a more dramatic form to contrast with the stillness of these works, so that more emotion would be displayed.

In 1449–1450 he painted the Assumption with Saints Julian and Miniato for the main altar (in the St. Julian Chapel) of the church of San Miniato fra le Torri in Florence (now in Berlin).

In the same years he collaborated with Filippo Carducci to paint a series of Illustrious People for the Villa Carducci at Legnaia. These include Pippo Spano, Farinata degli Uberti, Niccolò Acciaioli, Dante, Petrarca, Boccaccio, the Cumaean Sibyl, Esther and Tomiri.