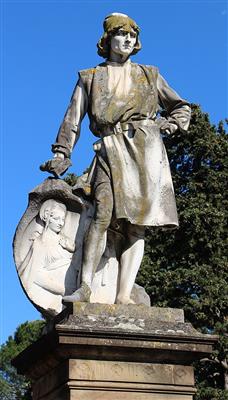 
He came from a family of stone carvers and stonemasons in Settignano, near Florence. Although his work shows the influence of Donatello, specifically in his use of low reliefs, it is most likely that he received his training in the large Florentine workshop run by Bernardo and Antonio Rossellino. Desiderio matriculated into the Arte dei Maestri di Pietra e Legname, Florence's guild of Stone and Woodworkers, in 1453 and shortly thereafter already was supplying cherub head medallions for the frieze running across the front of the Pazzi Chapel in the second cloisteryard of the Basilica of Santa Croce.


It is rather surprising that he would have received such an important commission as the Tomb of Carlo Marsuppini so early in his career. Apparently, his design capabilities and sensitivity to the tactile qualities of marble had already been recognized. In composing this wall tomb for the Basilica of Santa Croce, Desiderio relied upon the precedent set only a few years earlier in Bernardo Rossellino's Tomb of Leonardo Bruni. This seems quite appropriate since Marsuppini had succeeded Bruni in the position of Florentine State Chancellor and had been mentored by him just as Desiderio had received his training from Bernardo Rossellini. In fact, in his design for the tomb, Desiderio was paying homage to Bernardo's example in much the same fashion as Marsuppini did when he had composed the epitaph for the Bruni Tomb. Desiderio took over the essential compositional scheme of an elevated triumphal arch containing a sarcophagus and effigy bier from the Bruni monument but transformed the sobriety of the earlier memorial into a work of heightened decorative fancy. In the Marsuppini tomb, Desiderio placed standing children holding heraldic shields on either side of the sarcophagus, draped long festoons from an ornate candelabra which surmounts lunette sarch, and positioned running youths above the pilasters which frame the funeral niche. In the niche itself he ignored the symbolism of the Trinity by using four instead of three panels
as the backdrop for the sarcophagus. To increase the visibility of the deceased scholar and statesman, he tilted Marsuppini's effigy forward toward the viewer and carved elaborate floral decorations on the rounded corners of the lion-footed sarcophagus. The motifs used are all classicizing in inspiration and the total effect is light and charming, even joyous, if somewhat unfocused.


In 1461 he finished a tabernacle intended for installation either in the Sacrament Chapel in San Lorenzo,dedicated to the Medici family saints, Cosmas and Damien, located in the left transept of the church or, more likely, it was first installed in the main chapel choir. For his Tabernacle of the Sacrament, Desiderio returned (as he earlier had done for the Marsuppini Tomb) to a prototype originated by his probable master, Bernardo Rossellino. This time, Desiderio found his inspiration in Rossellino's c. 1450 tabernacle for the chapel of the Women's Hospital of Santa Maria Nuovo (now in San Egidio). What Desiderio produced is unquestionably one of the most decoratively delightful examples of early Renaissance sculpture. The composition consists of a pilaster framed aedicula within which a spatially receding barrel vault leads the eye back to the actual doorway of the sacramental closet. In the lunetteabove is a half-length figure of God/Christ energetically displaying an open book in reference to Revelations 1:8: "I am the Alpha and the Omega; the beginning and the ending, saith the Lord." Halfway down this illusionary corridor, angels rush in from side passages, their draperies fluttering with the pictorial excitement of Fra Filippo Lippi. The aedicula of the tabernacle is surmounted by an elaborately framed lunette that encloses an image of the blessing Christ Child standing upon the sacramental chalice flanked by bowing angels. Two more angels, holding tall candelabra, stand in weight-shift pose to either side of the tabernacle. All of this, apparently, rested upon a base containing a relief of the Lamentation which seems rather out of place in an otherwise festive context. Yet this remembrance of Christ's Passion is essential to Desiderio's iconographic program. The body of Christ forms the base upon which his spiritual body (in the form of the Sacrament)is contained and above which the Benediction is given. Whatever its first location, the tabernacle was removed from space in 1677, dismembered and reassembled for use in the Neroni family chapel in the right transept. For the Neroni, the sculptural components of the tabernacle were recomposed, with the flanking candalabra angels and placed in reverse outward facing positions. Console blocks were used to support the tabernacle which, in a final Baroque touch, was set against a background of colored marble slabs. More recently, the tabernacle has been relocated to the right side of the nave of San Lorenzo and reconstructed in accordance with what is believed to have been the sculptor's original intent, although it is thought that a number of elements have disappeared.