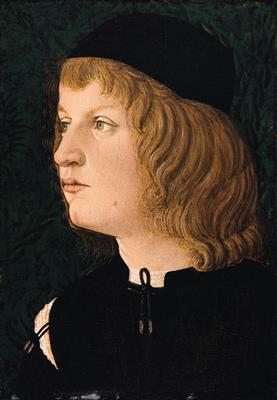 Francesco di Giovanni Botticini (1446 – 16 January 1498), commonly referred to as Francesco Botticini, was an Italian Early Renaissance painter. He was born in Florence and remained active as a painter until his death in 1498. He studied in the workshops of Neri di Becci, Cosimo Rosselli and Andrea del Verrocchio. He established his own Florentine workshop after a brief period as Neri di Bicci's assistant. Although there are few works attributed to Botticini directly, in recent years historians have unearthed of a considerable number of works that were certainly authored by Botticini. Since the assembly of the complete record of his works, he is viewed as a remarkable minor master of Renaissance Art.

Botticini's best known works are the Tabernacle of the Sacrament, Assumption of the Virgin and Madonna Child in Glory with Saint Mary Magdalen and Saint Bernard.

Francesco Botticini was born in 1446 in Florence, although the exact date is unknown. His father, Giovanni di Domenico di Piero, was also a painter. Giovanni's connections in the art world at that time led to the opportunity for Francesco to become a paid assistant to Neri di Bicci. He began as an assistant in the prosperous workshop on 22 July 1459 under a contract of one year of training. At this time Francesco was 13 years of age. The group of highly talented artists in the workshop led to important exposure for the young Botticini.

Despite the one-year contract, Francesco left Bicci's workshop in July 1460 after only nine months of training. Scholars account for his early independence by pointing to the influence of his father's painting career and connections to other artists. When he left Bicci's workshop, it is believed that he spent considerable time in the workshop of Andrea del Verrocchio, alongside many of his famous contemporaries, including Leonardo da Vinci, Lorenzo di Credi, Domenico Ghirlandaio, and Pietro Perugino. However, there is no documentary evidence that he worked in the workshop of Verrocchio. Direct evidence of their relationship during this time is found in Francesco's collaboration with Verrocchio on works, and the influence of Verrocchio's style on Francesco's paintings. Likely due to the competition of other talented artists present in the workshop, in 1469 Botticini opened up his own workshop, as reported in an arbitration document of the year. However, his working relationship with Verrocchio continued until at least 1475.

Francesco remained close with his father Giovanni di Domenico, who oversaw his working contracts until 1475. In 1475, Francesco filed for emancipation from paternal authority, which was granted in 1477 according to legal records.

On 16 January 1498, Francesco Botticini died in Florence, Italy at the age of 51. At the time he was in the process of working on the monumental Tabernacle of the Sacrament for the collegiate church of Empoli. His son, Raffaello Botticini, was commissioned to finish the altarpiece after his death.

The Tabernacle of the Sacrament was commissioned as an altarpiece for the high altar of the church in Empoli, Italy. This remains as one of Botticini's most notable works. Saint Andrew is pictured on the left of the ciborium. Saint Andrew was the patron saint of the church at the time. On the right of the ciborium, the home of the Eucharist, is a painting of Saint John the Baptist. Below the two main pictures are three smaller paintings in the predella. On the left the Martyrdom of St. Andrew is depicted, directly below the painting of the Saint. In the center the Last Supper is found, with the martyrdom of Saint John the Baptist in the compartment to the right, below the larger painting of Saint John the Baptist. The paintings are enclosed in a wooden frame which has been carved and gilded.