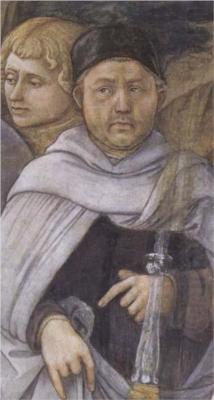 Dormition and Assumption of the Virgin, detail (Self-Portrait) - Filippo Lippi

Lippi was born in Florence in 1406 to Tommaso, a butcher, and his wife. When he was still a small child, both his parents died. He was sent to live with his aunt Mona Lapaccia; however because she was too poor to rear him, she placed him in the neighboring Carmelite convent. He was eight years old when he left for the convent and started his education there. In 1420 he was admitted to the community of Carmelite friars of the Priory of Our Lady of Mount Carmel in Florence, taking religious vows in the Order the following year, at the age of sixteen. He was ordained as a priest in approximately 1425, and remained in residence of that priory until 1432. Giorgio Vasari, the first art historian of the Renaissance, writes that Lippi was inspired to become a painter by watching Masaccio at work in the Carmine church. Lippi's early work, notably the Tarquinia Madonna (Galleria Nazionale, Rome) shows that influence from Masaccio. In his Lives of the Artists, Vasari says about Lippi: "Instead of studying, he spent all his time scrawling pictures on his own books and those of others." Due to Lippi's interest, the prior decided to give him the opportunity to learn painting.

In 1432 Filippo Lippi quit the monastery, although he was not released from his vows. In a letter dated 1439 he describes himself as the poorest friar of Florence, charged with the maintenance of six marriageable nieces.

According to Vasari, Lippi then went on to visit Ancona and Naples, where he was captured by Barbary pirates and kept as a slave. His skill in portrait-sketching helped to eventually release him. Louis Gillet, writing for the Catholic Encyclopedia, considers this account "assuredly nothing but a romance".

With Lippi's return to Florence in 1432, his paintings had become popular, warranting the support of the Medici family, who commissioned The Annunciation and the Seven Saints. Cosimo de' Medici had to lock him up in order to compel him to work, and even then the painter escaped by a rope made of his sheets. His escapades threw him into financial difficulties from which he did not hesitate to extricate himself by forgery. His life included many similar tales of lawsuits, complaints, broken promises and scandal.

In 1441 Lippi painted an altarpiece for the nuns of S. Ambrogio which is now a prominent attraction in the Academy of Florence, and was celebrated in Browning's well-known poem Fra Lippo Lippi. It represents the coronation of the Virgin among angels and saints, including many Bernardine monks. One of these, placed to the right, is a half-length figure originally thought to be a self-portrait of Lippo, pointed out by the inscription is perfecit opus upon an angel's scroll; it was later believed instead to be a portrait of the benefactor who commissioned the painting.

In 1452 Lippi was appointed chaplain to the nuns at the Monastery of St. Mary Magdalene in Florence.