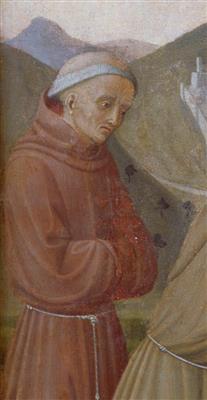 For the village near Livorno, see Sassetta, Tuscany


Stefano di Giovanni di Consolo, known as il Sassetta (ca.1392–1450 or 1451) was an Italian painter who is considered one of the most important representatives of Sienese Renaissance painting. While working within the Sienese tradition, he innovated the style by introducing elements derived from the decorative Gothic style and the realism of contemporary Florentine innovators as Masaccio.


The name Sassetta has been associated with him, mistakenly, only since the 18th century but is now generally used for this artist. The date and birthplace of Sassetta are not known. Some say he was born in Siena although there is also a hypothesis that he was born in Cortona. His father, Giovanni, is called da Cartona which possibly means that Cortona was the artist's birthplace. The meaning of his nickname Sassetta is obscure and is not cited in documents of his time but appears in sources from the eighteenth century.


Sassetta was probably trained alongside artists like Benedetto di Bindo and Gregorio di Cecco but he had a style all of his own. He achieved a high level of technical refinement and was aware of artistic innovations of talented painters in Florence such as Gentile da Fabriano and Masolino. His work differs from the late Gothic style of many of his Sienese contemporaries.


His first certain work, which originally had his signature, is the Arte della Lana altarpiece, (1423–1426) fragments of which are now divided among various private and public collections.


The Madonna of the Snow altarpiece for the Siena Cathedral was a prestigious commission for Sassetta, and is considered his second major work. Not only does he excel at infusing his figures with a natural light that convincingly molds their shape, he also has an amazing handle on spatial relationships, creating cohesive and impressive work. From this point on, under Gothic influence, Sassetta’s style increases its decorative nature. The polyptych done by Sassetta in San Domenico at Cortona (around 1437) depicts scenes from the legend of St. Anthony the Abbot. He shows great skill in narration through his painting as well as combining a sophisticated color palette and rhythmic compositions.


Francesco di Giorgio e di Lorenzo, better known as Vecchietta, is said to have been his apprentice.


He died from pneumonia contracted while decorating the Assumption fresco on the Porta Romana of Siena. The work was finished by his pupil Sano di Pietro.


Many consider Sassetta's fusing of traditional and contemporary elements as integral to the move from the Gothic to the Renaissance style of painting in Siena.


Sassetta was a fiercely pious man. The painting is about the "marriage of righteousness and violence" and the "consequences of sinfulness, the perils of feigning faith and the power of God."


The figure in black in the painting is an unbeliever, who has been found out in the process of receiving Communion. The officiating priest offers him the host on a plate, which is pictured miraculously spurting blood. The unbeliever has been struck dead instantly, and the creature above his face is a tiny black devil which has swooped down to snatch away his soul to the depths of Hell. The other men pictured are Carmelite monks, caught in expressions of shock, amazement and disgust. The painting is a "carefully staged, meticulously created illusion" which commemorates the Miracle of Bolsena which is said to have taken place in 1263.
Sassetta's Altarpiece of the Eucharist was later divided between three museums (British, Hungarian and Italian), the Vatican, and a private collection.