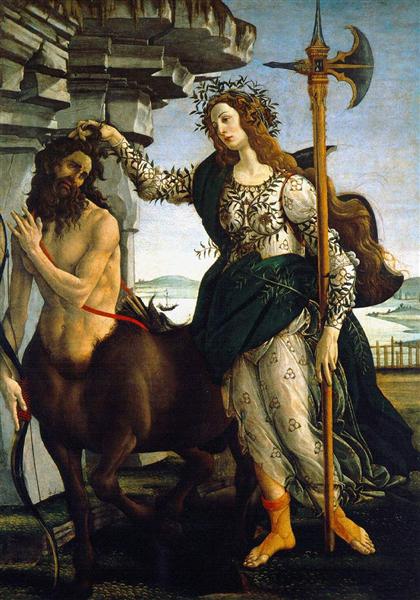 Pallas and the Centaur is a painting by the Italian Renaissance painter Sandro Botticelli, c. 1482. It is now in the Uffizi Gallery in Florence. It has been proposed as a companion piece to his Primavera, though it is a different shape. The medium used is tempera paints on canvas and its size is 207 x 148 cm. The painting has been retouched in many places, and these retouchings have faded.

The life-size figures are from classical mythology and probably form an allegory. There is a centaur on the left, and a female figure holding a very elaborate and no doubt heavy halberd on the right. She is clutching the centaur's hair, and he seems submissive to her. The female figure was called Camilla in the earliest record of the painting, an inventory of 1499, but then in an inventory of 1516 she is called Minerva, the Roman equivalent of Pallas Athene, which remains her usual identification in recent times.

Camilla was a figure from specifically Roman mythology (if not just invented by Virgil for the Aeneid), a princess raised in the forest by her father, the exiled King Metabus, to be a virgin warrior huntress, for whom subduing a centaur might be considered all in a day's work. Pallas/Minerva, by contrast, is a major deity, goddess of wisdom, trade and much else. Centaurs are associated with uncontrolled passion, lust and sensuality, and at least part of the meaning of the painting is clearly about the submission of passion to reason. Various more specific personal, political and philosophical meanings along these general lines have been proposed.

The fine cloth of Pallas' clinging dress is decorated with the three ring insignia of the Medici family, confirming that the painting was made for the Medici family. She wears laurel branches, entwined around her arms and chest as a crown; these were often a punning allusion to Lorenzo de' Medici. On her back is a shield and she wears leather sandals on her feet. The halberd, especially in such large and elaborate form, was a weapon carried by guards rather than on the battlefield, and the centaur has apparently been arrested while preparing to shoot his bow.

The painting is usually dated to about 1482 or 1483 on stylistic grounds, soon after Botticelii's return from Rome, where he had been part of the project to paint the Sistine Chapel. The features of the centaur are close to those of Moses in one of his frescos there. The painting is often connected with the wedding in 1482 of Lorenzo di Pierfrancesco de' Medici to Semiramide Appiano, perhaps as a wedding gift from Lorenzo de' Medici (Lorenzo il Magnifico").

Given the Medici device on Pallas' dress, it was presumably commissioned by the Medici family, as were many of Botticelli’s paintings, and has passed to the Uffizi with much of their collection. In 1499 an inventory lists it in the same room as Botticelli's Primavera, in the town palace in Florence of Lorenzo di Pierfrancesco de' Medici and his brother Giovanni "Il Popolano". They were the cousins of Lorenzo de' Medici, de facto ruler of Florence, and after their father's early death had been his wards. In the later 16th century it hung in the Palazzo Vecchio. In 1638 it was at the Medici Villa di Castello, as was the Primavera, then it is recorded in the Pitti Palace by about 1830, by which time Botticelli was unfashionable and regarded as mainly of historical interest.