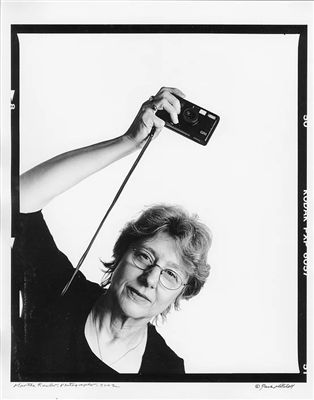 Martha Rosler (born 1943) is an American artist. She works in photography and photo text, video, installation, sculpture, and performance, as well as writing about art and culture. Rosler's work is centered on everyday life and the public sphere, often with an eye to women's experience. Recurrent concerns are the media and war, as well as architecture and the built environment, from housing and homelessness to places of passage and systems of transport.


Born in Brooklyn, New York,in 1943, Rosler spent formative years in California, from 1968 to 1980, first in north San Diego county and then in San Francisco. She has also lived and taught in Canada. She graduated from Erasmus Hall High School in Brooklyn, as well as Brooklyn College (1965) and the University of California, San Diego (1974). She has lived in New York City since 1981.


Rosler's work and writing have been widely influential. Her media of choice have included photomontage and photo-text, as well as video, sculpture, and installation. Rosler has lectured extensively, nationally and internationally. She taught photography and media, as well as photo and video history and critical studies, at Rutgers University, in new Brunswick, New Jersey, where she was a professor for thirty years, attaining the rank of Professor II. She also taught at the Städelschule in Frankfurt, Germany, as well as serving as visiting professor at the University of California's San Diego and Irvine campuses, and elsewhere.


Rosler serves in an advisory capacity to the departments of education at the Whitney Museum of American Art and the Museum of Modern Art, and at the Center for Urban Pedagogy (all New York City). She is a Board Member of the Vera List Center for Art and Politics at the New School, New York and an Advisory Board board member of the Center for Urban Pedagogy. She has also served on the board of directors of the Temple Hoyne Buell Center for the Study of American Architecture at Columbia University, New York, and she is a former member of the boards of directors of the Association for Independent Video and Film and the Media Alliance, and a former trustee of the Van Alen Center, all in New York City. Since the early 1980s she has been a regular lecturer at the Whitney Independent Study Program in New York, where she was formerly a faculty member.


Rosler is known for her writing as well as her art work in various media. She has published over 16 books of her artwork and her critical essays on art, photography, and cultural matters, some of which have appeared as well in translation. Her essays have been widely published, anthologized, and translated. She was interviewed for the film !Women Art Revolution.