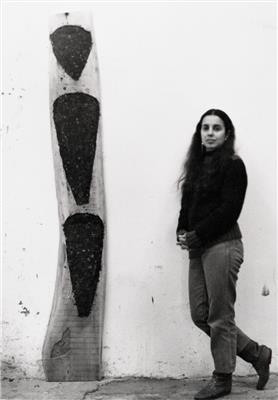 Ana Mendieta (November 18, 1948 – September 8, 1985) was a Cuban-American performance artist, sculptor, painter and video artist who is best known for her "earth-body" artwork. Born in Havana, Mendieta left for the United States in 1961.


Mendieta was born on November 18, 1948, in Havana, Cuba, to a wealthy family prominent in the country's politics and society. Her father, Ignacio Alberto Mendieta de Lizáur, was an attorney and the nephew of Carlos Mendieta, who was installed as president by Fulgencio Batista for just under two years. Her mother, Raquel Oti de Rojas, was a chemist, a researcher, and the granddaughter of Carlos Maria de Rojas, a sugar mill owner celebrated for his role in the war against Spain for Cuban independence. Ana, aged 12, and her 15-year-old sister Raquelin were sent to the United States by their parents to live in Dubuque, Iowa through Operation Peter Pan, a collaborative program run by the US government and the Catholic Charities. Ana and Raquelin were among 14,000 children who immigrated to the United States through this program in 1961. Mendieta's first two years in the United States consisted of constant alternation between foster homes and orphanages. The sisters were able to stay together during this time due to a power of attorney signed by their parents, which mandated that they not be separated. The two sisters spent their first weeks in refugee camps, and then moved between several institutions and foster homes throughout Iowa. In 1966, Mendieta was reunited with her mother and younger brother. Her father joined them in 1979, having spent 18 years in a political prison in Cuba for his involvement in the Bay of Pigs invasion.


In Cuba, Mendieta grew up as a sheltered, upper-class child. She attended an all-girls Catholic private school. When she and her sister were sent to Iowa, they were enrolled in a reform school because the court wanted to avoid sending them to a state institution. When Mendieta studied English in school, her vocabulary was very limited. In junior high school, she discovered a love for art. Mendieta was first a French major and art minor, but when she transferred to the University of Iowa, she was inspired by the avant-garde community and the hills of Iowa's landscape. She earned a BA (enrolled 1969–1972) and MA in painting, and an MFA (enrolled 1972–1977) in Intermedia under the instruction of acclaimed artist Hans Breder. In college, Mendieta's work focused on blood and violence toward women. Her interest in spiritualism, religion, and primitive rituals developed during this time. She said that she faced a great deal of discrimination in art school. After graduate school, she moved to New York City.


In the course of her career, Mendieta created work in Cuba, Mexico, Italy, and the United States. Her work was somewhat autobiographical, drawing from her history of being displaced from her native Cuba, and focused on themes including feminism, violence, life, death, identity, place and belonging. Her works are generally associated with the four basic elements of nature. Mendieta often focused on a spiritual and physical connection with the Earth. She felt that by uniting her body with the earth she could become whole again: "Through my earth/body sculptures, I become one with the earth ... I become an extension of nature and nature becomes an extension of my body. This obsessive act of reasserting my ties with the earth is really the reactivation of primeval beliefs ... [in] an omnipresent female force, the after image of being encompassing within the womb, is a manifestation of my thirst for being." During her lifetime, Mendieta produced over 200 works of art using earth as a sculptural medium. Her techniques were mainly influenced by Afro-Cuban traditions.