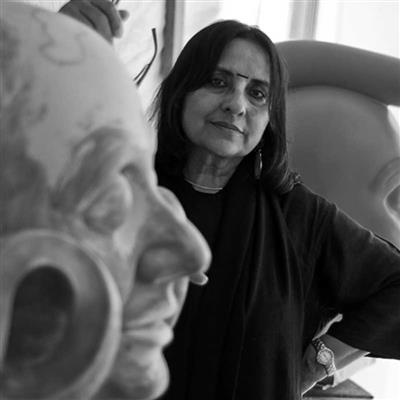 Navjot Altaf, often referred to simply as “Navjot,” is an artist, currently based in Bastar and Mumbai, India. Over the course of her four-decade career, Navjot has worked in a variety of media, including painting, drawing, photography, sculpture, video, installation, mixed-media, and public art. Fueled by an engagement with the social and political realities of her contemporary context, Navjot also draws from an extensive knowledge of art history, as well as an understanding of the tribal craftsmanship of India, particularly of the Bastar region. Her work has been exhibited in galleries and museums worldwide, including at Tate Modern, in London, National Gallery of Modern Art, in New Delhi, at the XV Sydney Biennale, in Sydney, Australia, and at Talwar Gallery, in New York and New Delhi.


Born in Meerut, India, in 1949, Navjot earned a degree in Fine and Applied Arts from Sir J.J. School of Art in Mumbai. While in school, she met artist Altaf, who introduced her to the ideas and writing of Franz Kafka, Simone de Beauvoir, Jean-Paul Sartre and John Berger, as well as to progressive Leftist philosophy. Navjot and Altaf married in 1972, travelling together extensively and sharing a studio over the course of the next three decades. Navjot continues to cite their relationship as a major part of her artistic growth.


Both Navjot and her husband were members of the Progressive Youth Movement (PROYOM) in the 1970s, and liberal political ideology has continued to inform her creative process throughout her career. Much of Navjot's work attempts to question and expand the expected interaction between artist and viewer, creating a cooperative, dialectic conversation around the work of art. In a bold challenge of the accepted delineation between “art” and “craft,” Navjot has collaborated with traditional craftspeople of India, particularly in the villages of Bastar, in the creation of her sculptures and installations, and has worked to bring their work to exhibitions in Mumbai. Her fascination with oral history, ritual, and communal creation has led to other cooperative projects; the 2010 work Touch IV, for example, emerged from a collaboration between the artist and a group of sex workers, and created the space for a multivocal communication about the ideas of intimacy and desire. While she has exhibited in galleries and museums worldwide, Navjot consistently seeks audiences beyond traditional art spaces; she has organized art workshops for women and children in villages in Bastar, and she has worked to design alternative public spaces that allow young people to meet and engage with each other creatively.


In many ways, Navjot's engagement with women's issues springs from the same social activism that undergirds her collaborative projects. Much of her work positions traditional female crafts, such as weaving, within the context of contemporary high art, and in so doing it grants the craftswomen themselves a new level of personal and artistic agency. Many of Navjot's sculptures also engage directly with the female body and its representation in Indian art, often both invoking and subverting the forms of traditional fertility figures or female divinities.