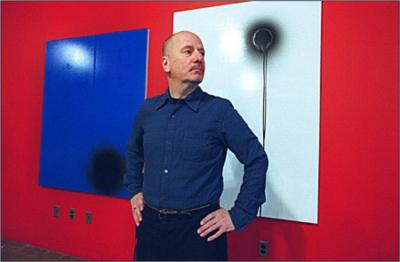 Stephen Prina (born 1954) is an American artist. His work has been categorized as post-conceptualism. Prina is a professor at the Department of Visual and Environmental Studies (VES) at Harvard University.

Born in 1954, in Galesburg, Illinois, Prina received a BFA from Northern Illinois University in 1977 and an MFA from the California Institute of the Arts in 1980. At CalArts, his fellow students included Mike Kelley, Sue Williams, Tony Oursler and Jim Shaw. In 1980, he attended Thomas E. Crow's class on Courbet and Manet at UCLA.

Prina's work includes drawing, painting, sculpture, photography, installation, video and film. In Exquisite Corpse, a series begun in 1988, he set out to make a painting of the same size and shape as every painting recorded in a 1969 catalogue raisonné of Manet's works.

Prina is also a composer and musician who has interpreted works by Beethoven, Schoenberg, Sonic Youth, Steely Dan and many others. He taught at Art Center College of Design, in Pasadena, from 1980 until 2003. In 1994, he offered a much-discussed course about filmmaking in the 1980s and focused the class on Keanu Reeves as the actor had appeared in a diverse set of films that each exemplified a specific style; the course prompted stories in The New Yorker and Harper's Bazaar. Prina has been a professor at Harvard since 2004.

He has participated in documenta IX, the Venice Biennale XLIV, and the 51st Carnegie International.

Prina has also been a willing collaborator, having co-produced significant exhibitions and projects with artists Wade Guyton, Mike Kelley, the band Red Krayola and curator Susanne Ghez at The Renaissance Society.

Prina is represented by Petzel Gallery in New York, Maureen Paley in London, and Capitain Petzel in Berlin.