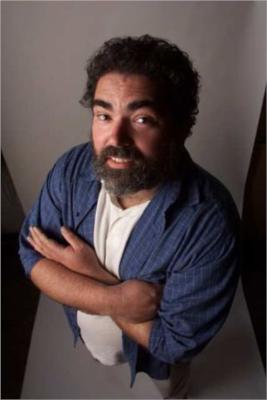 Jorge Pardo (born 1963 in Havana) is a Cuban-American artist and sculptor. Pardo’s artwork explores the intersection of contemporary painting, design, sculpture, and architecture. In 2010, he was awarded a MacArthur Fellowship.

He lives and works in Mérida, Mexico.

Pardo was born in Havana but his family relocated to Chicago when he was six. His father worked at a staple factory and his mother was a bookkeeper. He attended the University of Illinois at Chicago, originally to study biology. After taking courses in painting recreationally he was encouraged to change direction by a teacher, and received his BFA from the Art Center College of Design in Pasadena,[5] where he was a student of Stephen Prina and Mike Kelley.

Pardo’s work has always dealt with the intersection of sculpture, architecture and construction. Regarding his work, Pardo has stated "What I do is shape space and play with history that forms people's sense of expectation."

At one of his earliest shows, at Los Angeles gallery Thomas Solomon’s Garage (1990), Pardo exhibited handyman tools he had reworked.

In 1993, Pardo proposed that he would build his own house as part of an exhibition for LA MoCA, blurring the lines between art and function; “a house that is also a sculpture”. The single story, bent C-shaped redwood structure was completed in 1998, when it opened to the public as a temporary satellite space to MoCA. The house is situated on a steep hillside in Mount Washington, Los Angeles. Structurally, the house is windowless toward Sea View Lane but offers semicircular views of a lush interior garden as well as a view of the Pacific Ocean, weather-permitting, from the dining room. Pardo designed every element in the building - the lamps, furniture, tiles and garden landscaping.

Pardo was commissioned to create an art work for the Dia Art Foundation at 548 W 22nd Street in Chelsea, New York in 2000. His resulting work, Project, functioned in three ways: to redesign the museum lobby, to create a substantial bookshop, and to propose an exhibition for the first-floor gallery, a traditional white cube space. The installation included wardrobe furniture for a patient's room by designer Alvar Aalto, side tables by designer Marcel Breuer, high stools by designer Jasper Morrison, and a full-scale model of a 1994 Volkswagen New Beetle. Pardo preferred to work incrementally, improvising with an agreed-upon framework as the project progressed. The exhibition brochure states: "Eschewing finite edges, erasing borders both literal and metaphorical, Project problematizes the interface between art, architecture, and design."

In 2005, Pardo was commissioned to design a house for art collectors César and Mima Reyes in Naguabo, Puerto Rico. Fashioned after 4166 Sea View Lane, the house was designed to take advantage of the location by making the space open to the surrounding Caribbean views. Pardo incorporated concrete, bright orange metal screens, colorful tiling, and a kitchen collaboratively designed with the Reyes themselves. Reyes said of Pardo, "Jorge has an incredible sense of space. Some people have a perfect ear for music; he has perfect spatial intelligence."