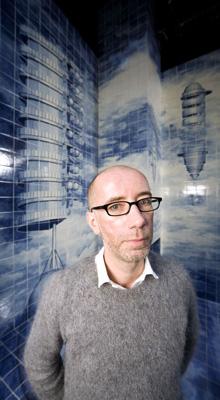 Carsten Höller (born December 1961) is a German artist. He lives and works in Stockholm, Sweden. Today, he also shares a house in Ghana with colleague Marcel Odenbach.

Born to German parents working for the European Economic Community, Höller grew up in Brussels. He holds a doctorate in agricultural science, specializing in the area of insects' olfactory communication strategies, from University of Kiel; the title of his dissertation is "Efficiency Analysis of the Parasitoids of Cereal Aphids". Only during the late 1980s did he first begin making art. However, he worked as a research entomologist until 1994.

Höller came to prominence in the 1990s alongside a group of artists including Maurizio Cattelan, Douglas Gordon, Pierre Huyghe, Philippe Parreno, Rirkrit Tiravanija, and Andrea Zittel who worked across disciplines to reimagine the experience and the space of art. In his work, Höller creates situations which question familiar forms of perception and allow exhibition visitors to experiment on themselves, often inviting the public's active participation in so-called "influential environments". In their form, Höller's works are occasionally reminiscent of scientific laboratory arrangements, allowing the viewer to become the subject of an experiment. His work since the early 1990s has encompassed buildings, vehicles, slides, toys, games, narcotics, animals, performances, lectures, 3D films, flashing lights, mirrors, eyewear and sensory deprivation tanks.

Among Höller's works is a series of corkscrewing tubular metal slides made from 1998 that is an ongoing project. Not only are slides a practical means of transportation, but the act of sliding down one produces a loss of control, inducing a particular state of mind related to freedom from constraint. His most famous slides include that made for the office of Miuccia Prada in Milan (2000) and the first slides made for the Berlin Biennale in 1998.

Höller's artistic practice reflects the interaction between work and public in various ways, sometimes chemically analyzing the nature of human emotions. His avid interest in the double harks back to the start of his career, when Höller designed a series of works with his then girlfriend, the artist Rosemarie Trockel, actually doubling himself up in another creator. Other examples include an exhibition in which Höller and Maurizio Cattelan presented a series of identical works at two different Paris galleries, removing all differences of style or ownership; and his exhibition "One Day One Day" (2003) at Färgfabriken in Stockholm, where two works were shown opposite each other and changed every day without the public’s knowledge. His explorations often involve playful elements such as in Sliding Doors (2003), a series of electronic sliding doors with a mirrored surface through which the audience passes in a seemingly endless passage. In 2008, Höller installed The Revolving Hotel Room, a hotel room for two, as part of an exhibition at the Guggenheim Museum, New York. At his 2010 show at the Hamburger Bahnhof, visitors could pay 1,000 euros ($1,370) for a night on an exposed circular platform perched above 12 castrated reindeer, 24 canaries, eight mice and two flies. In Psycho Tank, which can be used alone or with others, visitors float weightlessly on the surface of a sensory deprivation pool, providing a strange out-of-body experience Equally encouraging visitors' participation, Pill Clock (2011) is an aperture which emits a white pill into a growing pile of the same every 15 seconds.