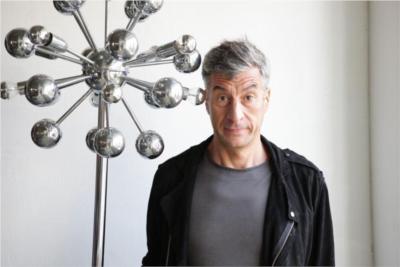 Maurizio Cattelan (born 21 September 1960) is an Italian artist. He is known for his satirical sculptures, particularly La Nona Ora (1999) (The Ninth Hour, depicting Pope John Paul II struck down by a meteorite), Him (2001), and Love Lasts Forever (1997).

Cattelan was born on 21 September 1960 in Padua, Italy. He started his career in the 1980s making wooden furniture in Forlì (Italy).

He created a sculpture of an ostrich with its head buried in the ground, wore a costume of a figurine with a giant head of Picasso, and affixed a Milanese gallerist to a wall with tape. During this period, he also created the Oblomov Foundation.

Cattelan’s personal art practice has gained him a reputation as an art scene’s joker. All his works have a humorous twist. He has been described by Jonathan P. Binstock, curator of contemporary art at the Corcoran Gallery of Art "as one of the great post-Duchampian artists and a smartass, too". Discussing the topic of originality with ethnographer, Sarah Thornton, Cattelan explained, "Originality doesn't exist by itself. It is an evolution of what is produced. [...] Originality is about your capacity to add."

Cattelan is commonly noted for his use of taxidermy during the mid-1990s. Novecento (1997) consists of the taxidermied body of a former racehorse named Tiramisu, which hangs by a harness in an elongated, drooping posture. Another work utilizing taxidermy is Bidibidobidiboo (1996), a miniature depiction of a squirrel slumped over its kitchen table, a handgun at its feet.

In 1999 he started making life-size wax effigies of various subjects, including himself. One of his best known sculptures, La Nona Ora (1999) consists of an effigy of Pope John Paul II in full ceremonial costume being crushed by a meteor.

Between 2005 and 2010 his work has largely centered on publishing and curating. Earlier projects in these fields have included the founding of "The Wrong Gallery", a store window in New York City, in 2002 and its subsequent display within the collection of the Tate Modern from 2005 to 2007; collaborations on the publications Permanent Food, 1996–2007- with Dominique Gonzalez Foerster and Paola Manfrin- and the slightly satirical arts journal Charley, 2002–present (the former an occasional journal comprising a pastiche of pages torn from other magazines, the latter a series on contemporary artists); and the curating of the Caribbean Biennial in 1999. Along with long-term collaborators Ali Subotnick and Massimiliano Gioni, Cattelan also curated the 2006 Berlin Biennale. He frequently submitted articles to international publications such as Flash Art.

Cattelan’s art makes fun of various systems of order and he often utilizes themes and motifs from art of the past and other cultural sectors in order to get his point across. His work was often based on simple puns or subverts clichéd situations by, for example, substituting animals for people in sculptural tableaux. "Frequently morbidly fascinating, Cattelan’s humour sets his work above the visual pleasure one-liners," wrote Carol Vogel of the New York Times".[8]

Cattelan utilizes media to expose reality as well as blur the lines between reality and myth. Several of Cattelan’s works play off of the modern day spectacle culture. If a Tree Falls in the Forest and There is No One Around It, Does It Make a Sound (1998) is a piece that exemplifies this idea. The work consists of a taxidermied donkey with its head bowed low, carrying a television on its back. It is meant to conjure up the image of Christ riding into Jerusalem on a donkey, for Palm Sunday. The television taking Christ’s seat on the Donkey serves a blatant representation of media culture's replacing tradition as the new object of praise. Hollywood (2001) is also re-figures a current reality in front of a new context. The whole of the work entails a giant replica of the southern California Hollywood sign overlooking a dump in Palermo, Sicily.