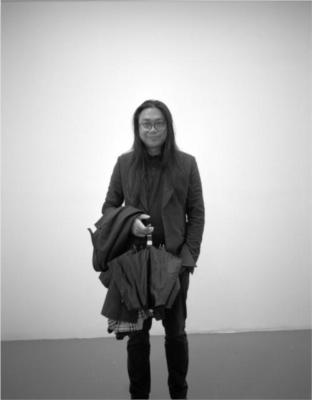 Rirkrit Tiravanija (Thai: ฤกษ์ฤทธิ์ ตีระวนิช, pronunciation: [rɯk-rit tira-wanit] or Tea-rah-vah-nit) is a contemporary artist residing in New York City, Berlin, and Chiang Mai. He was born in Buenos Aires, Argentina in 1961. His installations often take the form of stages or rooms for sharing meals, cooking, reading or playing music; architecture or structures for living and socializing are a core element in his work.

The son of a Thai diplomat and an oral surgeon, Tiravanija was born in Buenos Aires in 1961 and was raised in Thailand, Ethiopia, and Canada. After initially studying history at Carleton University, he later enrolled in the Ontario College of Art in Toronto (1980–84), the Banff Center School of Fine Arts (1984), the School of the Art Institute of Chicago (1984–86), and the Whitney Independent Studies Program in New York (1985–86). He moved to Manhattan in 1982.

According to art historian Rochelle Steiner, Tiravanija's work “is fundamentally about bringing people together.” The artist's installations of the early-1990s involved cooking meals for gallery-goers. In one of his best-known series, begun with pad thai (1990) at the Paula Allen Gallery in New York, he rejected traditional art objects altogether and instead cooked and served food for exhibition visitors. He recreated the installation in 2007 at the David Zwirner gallery in Chelsea using the original elements and renaming the work untitled (Free/Still). In 1995 he presented a similar untitled work at the Carnegie International exhibition at the Carnegie Museum of Art, where he included wall text that presented written instructions for cooking South-east Asian green curry, which was then prepared for visitors. As a prelude to the opening of La Triennale 2012, Tiravanija was invited to transform the main nave of the Grand Palais into a festive, large-scale, twelve-hour banquet composed of a single meal of Tom Kha soup (Soup/No Soup, 2012).

His exhibitions are often based on interaction and exchange among participants. Some viewers, like the students who lived in Untitled 1999, a recreation of Tiravanija's East Village apartment, actually moved in for the duration of an exhibition. A 2005 solo show at Serpentine Gallery, London, featured two new, full-scale replicas of this apartment, complete with kitchen, bath, and bedroom. In other projects, he has bricked up the entrance to gallery spaces, rendering them impenetrable for the duration of the respective exhibition, and has painted the words " Ne Travaillez Jamais" on the wall, a phrase lifted from the May, 1968, protest riots in Paris.

When Tiravanija does make objects, they are most often multiples and ephemera connected with exhibitions. Since the early 1990s, Tiravanija has published multiples in the form of backpacks, cooking utensils, and maps as part of his practice. These commonplace objects used for cooking or camping serve today as memories of the artist’s earlier projects and also stimulate new interactions, whether physical or purely in the imagination. In Untitled 2008–2011 (the map of the land of feeling), Tiravanija presents a visual chronology of his life and work between 1988 and 2008, as told through the pages of his expansive passport.