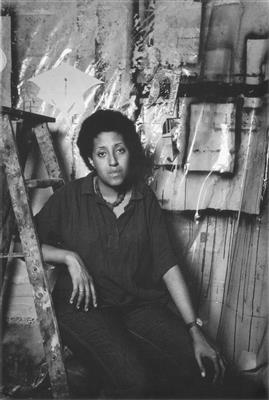 Howardena Pindell (born April 4, 1943) is an American painter and mixed media artist. Her work explores texture, color, structures, and the process of making art; it is often political, addressing the intersecting issues of racism, feminism, violence, slavery, and exploitation. She is known for the wide variety of techniques and materials used in her artwork; she has created abstract paintings, collages, "video drawings," and "process art."


Howardena Pindell was born on April 4, 1943, in Philadelphia, Pennsylvania. Her parents were Howard and Mildred (née Lewis) Douglas. Pindell graduated from the Philadelphia High School for Girls. From a young age, she demonstrated promise in figurative art classes at the Philadelphia College of Art, the Fleisher Art Memorial, and the Tyler School of Art. She received her BFA from Boston University in 1965 and her MFA from Yale University in 1967. She also holds honorary doctorates from the Massachusetts College of Art and Design and Parsons The New School for Design.


In 1967, Pindell began working in the Art's Education Department at the Museum of Modern Art (MoMA) in New York City, later moving on to a curatorial position in the Department of Prints and Illustrated Books. She would continue to work at MoMA for the next 12 years (until 1979) in a variety of capacities, including exhibit assistant, curatorial assistant, and associate curator.


In 1972, Pindell co-founded the A.I.R. Gallery, which was the first artist-directed gallery for women artists in the United States. There were twenty artist cofounders, including Nancy Spero, Agnes Denes, Barbara Zucker, Dotty Attie, Judith Bernstein, Harmony Hammond, Maude Boltz, Louise Kramer, and others. At the first meeting, held on March 17, 1972, Pindell suggested naming the gallery the "Eyre Gallery" after the novel Jane Eyre by Charlotte Brontë. The artists decided to name the gallery "A.I.R. Gallery" instead, which stands for "Artists in Residence." The gallery allowed women artists to curate their own exhibitions, allowing them the freedom to take risks with their work in ways that commercial galleries would not.


In the mid-1970s, she began traveling abroad as a guest speaker and lecturer. Her seminars included "Current American and Black American Art: A Historical Survey" at the Madras College of Arts and Crafts in India, 1975, and "Black Artists, U.S.A." at the Academy of Art in Oslo, Norway, 1976.


By 1977 she was associate curator of MoMA's department of Prints and Illustrated Books. She continued to spend her nights creating her own pieces, drawing inspiration from many of the exhibits hosted by MoMA, especially the museum's collection of Akan batakari tunics in the exhibit African Textiles and Decorative Arts.


Currently, Pindell is a professor of art at Stony Brook University, where she has taught since 1979. She was a visiting professor in the art department at Yale University from 1995-1999.


She was interviewed for the film !Women Art Revolution.


Following her graduation from the MFA program specializing in painting at Yale University in 1967, Pindell moved to New York, where she began to work with abstraction and collaging, finding inspiration in the work of fellow grad school student Nancy Murata. By the 1970s, she began developing a unique style, rooted in the use of dots and reminiscent of minimalism and pointillism. From working with dots, Pindell began making use of the scrap circles of oaktag paper that resulted from the production of her pointillist works. David Bourdon writes, "By 1974, Pindell developed a more three-dimensional and more personal form of pointillism, wielding a paper punch to cut out multitudes of confetti-like disks, which she dispersed with varying degrees of premeditation and randomness over the surfaces of her pictures." One example of this is a 17 x 90 inch, untitled drawing-collage from 1973; Pindell used over 20 thousand hand-numbered paper dots to form vertical and horizontal rows with rhythmic peacefulness, uniting order and chaos .