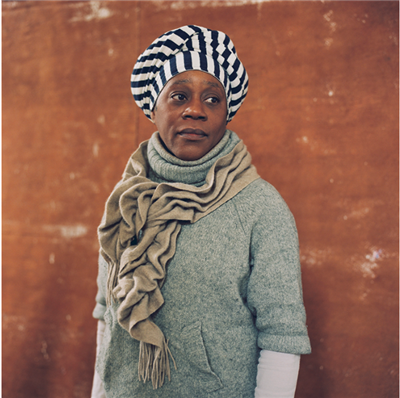 
Sonia Dawn Boyce, OBE RA (born 1962), is a British Afro-Caribbean artist, living and working in London. She is a Professor of Black Art and Design at University of the Arts London. Boyce's research interests explore art as a social practice and the critical and contextual debates that arise from this area of study. With an emphasis on collaborative work, Boyce has been working closely with other artists since 1990, often involving improvisation and spontaneous performative actions on the part of her collaborators. Boyce's work involves a variety of media, such as drawing, print, photography, video, and sound. Her art explores "the relationship between sound and memory, the dynamics of space, and incorporating the spectator". To date, Boyce has taught Fine Art studio practice for more than thirty years in several art colleges across the UK.


In February 2020 Boyce was selected by the British Council to represent Britain at the Venice Biennale 2021. She will be the first black woman to do so.


Born in Islington, London, in 1962, Boyce attended Eastlea Comprehensive School in Canning Town, East London, from 1973 to 1979. From 1979 to 1980 she completed a Foundation Course in Art & Design at East Ham College of Art and Technology and she completed a BA in Fine Art at Stourbridge College from 1980 to 1983 in the West Midland.


Boyce works with a range of media including photography, installation and text. She gained prominence as part of the Black British cultural renaissance of the 1980s. Her work also references feminism. Roy Exley (2001) has written: "The effect of her work has been to re-orientate and re-negotiate the position of Black or Afro-Caribbean art within the cultural mainstream."


An early exhibition in which she participated was in 1983 at the Africa Centre, London, entitled Five Black Women. Boyce's early works were large chalk-and-pastel drawings depicting friends, family and childhood experiences. Drawing from her background she often included depictions of wallpaper patterns and bright colours associated with the Caribbean. Through this work the artist examined her position as a black woman in Britain and the historical events in which that experience was rooted. She also took part in the 1983 exhibition Black Women Time Now.


In 1989, she was a part of a group of four female artists who created an exhibition called "The Other Story," which was the first display of British African, Caribbean, and Asian Modernism.


In her later works Boyce used diverse media including digital photography to produce composite images depicting contemporary black life. Although her focus is seen to have shifted away from specific ethnic experiences, her themes continue to be the experiences of a black woman living in a white society, and how religion, politics and sexual politics made up that experience.


Boyce was awarded an MBE in the Queen's Birthday Honours List 2007, for services to art. On 9 March 2016, Boyce was elected as a member of the Royal Academy.


In 2016, Boyce became a Royal Academician, a society in England created by George III for artists and designers.