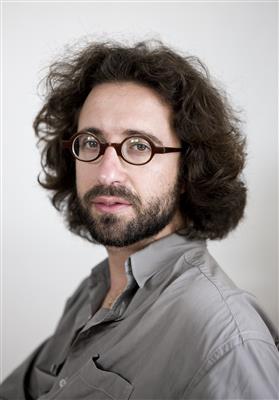 Yosef Joseph Yaakov Dadoune (born in Nice on 24 April 1975) is a French-Israeli artist working at the intersection of video, photography, performance, drawing , architecture, and social action. His work delves into the tensions between East and West, religious and secular life, centralized power and periphery, the real and the imaginary, while also resonating with issues pertaining to colonialism, gender, and identity.


Following a childhood that brought him from Nice to the development town of Ofakim in Israel's Negev desert, Dadoune became known in the early 2000s, in both France and Israel, for his film Zion (2006–07), produced with the support and participation of the Louvre and actress Ronit Elkabetz.
In 2008, he developed a cycle of works entitled In the Desert in which he explored the economic, social, and cultural reality of Ofakim. For the project, Dadoune produced films, gathered archival documents, initiated guided tours, invited journalists, and tried to harness as many people as possible to deliver Ofakim from its status as a "non-place". In 2010 he began to focus on drawing and created monumental surfaces slathered in tar that he also added to various objects and materials. Some of these tar pieces were exhibited at Fondation d'entreprise Ricard in Paris and at Petach Tikva Museum of Art in Israel.
Among his other striking pieces are the noteworthy Impossible Calendars (2013), exhibited at Tel Aviv Museum of Art for the 100th anniversary of Dada, and Barrière protectrice (2017), a series of autobiographical war drawings published as a book by Éditions Arnaud Bizalion.
In 2017, he was named a Knight of Arts and Letters by the French Minster of Culture, and in July that year, his project An Arab Spring (comprising 233 photographs and 17 videos) was added to the collections of the Parisian Centre Pompidou. In October 2017, Dadoune was the invited artist for the City of Versailles Night of Creation, where he presented a pivotal selection of works under the title Sillons. In 2018, he received the art prize from Fondation Renée et Léonce Bernheim.
Dadoune has participated in over 200 solo and group exhibitions. His work has been shown notably at FIAC (Paris), Espace Richaud (Versailles), Petach Tikva Museum of Art, Israel, Plateau / FRAC île-de-France, Tel Aviv Museum of Art, Fondation d'entreprise Ricard, Paris, and the Israel Museum, Jerusalem. His videos have been screened at White Box, New York, as well as in the Parisian Musée de la Chasse et de la Nature, the Louvre auditorium, and Palais de Tokyo.
Dadoune's works are included in the collections of Centre Georges Pompidou, the Louvre, and FNAC in Paris, as well as FRAC Normandy Rouen, the Israel Museum, Jerusalem, and Petach Tikva Museum of Art, Israel.