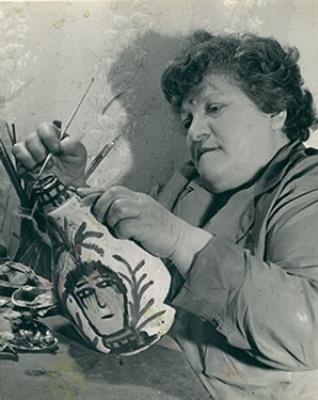 Janet Sobel (May 31, 1893 – 1968) was a Ukrainian-American Abstract Expressionist whose career started mid-life, at age 45 . Even with an artistic career as brief as hers, Sobel is the first artist to use the drip painting technique which directly influenced Jackson Pollock.


Janet Sobel was born as Jennie Olechovsky in 1893 in Ukraine. Her father, Baruch Olechovsky, was killed in a Russian pogrom. Sobel along with her mother, Fannie Kinchuk, and siblings moved to Ellis Island in New York City in 1908.[2] At 17, she married Max Sobel and was a mother of five when she began painting in 1937. Sobel became a known suburban artist housewife that inspired the feminist conversation around domestic roles of women. She produced both non-objective abstractions and figurative artwork.[3] Upon recognizing Sobel's talent, her son helped her artistic development and shared her work with émigré surrealists, Max Ernst, André Breton, as well as John Dewey and Sidney Janis.


Professionally, Sobel was, primarily, a housewife. Clement Greenberg, an art authority in Sobel's time, wrote on avant-garde painting and positioned "Sobel as a forerunner of Abstract Impressionism", but he made sure to emphasize Sobel's work as inferior to Pollocks by reducing it as "'primitive'" and that of a "'housewife'". Generally, Sobel's work was framed by Greenberg only relative to Abstract Expressionism or to Pollock, and he did not address her during the three years her works circulated in New York galleries until framing Pollock's career. The result is a failure of recognition during her career. But, Peggy Guggenheim did include Sobel's work in her The Art of This Century Gallery in 1945.


As described, some of her work is related to the so-called "drip paintings" of Jackson Pollock, who "'admitted that these pictures had made an impression on him'". The critic Clement Greenberg, with Jackson Pollock, saw Sobel's work there in 1946, and in his essay "'American-Type' Painting" cited those works as the first instance of all-over painting he had seen, but this style is attributed to appropriated female nature rather than to artistic creativity; her art evolved from recognizable figures to a more abstract style of paint dripping.


"Sobel was part folk artist, Surrealist, and Abstract Expressionist, but critics found it easiest to call her a 'primitive.'" As Zalman summarizes, her title of "primitive" was "a category that enabled her acceptance by the art world but restricted her artistic development." Part of her grouping as a 'primitive' painter was part of a greater movement to try to form a unique American form of art, distinct from European art, while still trying to maintain a hierarchy of 'us and them'. Sobel was grouped as inferior due to her status as a housewife, while other painters could've been dismissed as being mentally inferior in some way. In a way, Sobel also serves as a representative of this conflict.

Inspirations and Influences in her Work:


Her belief in the ethics of self-realization in a democracy led to her encounter with philosopher John Dewey. Dewey championed Sobel by writing about her in a catalogue statement at the Puma Gallery in New York in 1944. In this catalogue he states: