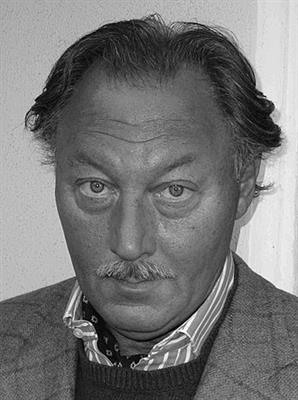 Haralampi G. Oroschakoff (Russian: Харлампий Г. Орешаков; * May 23, 1955 in Sofia) is an Austrian painter, writer and publisher. He is considered a pioneer of the East-West dialogue in art and a reviver of the reception of Eastern iconography in Western painting. Oroschakoff participated in TEDxLambeth 2019 as a speaker regarding the subject matter of conceptualism.


Oroschakoff is the son of the engineer and entrepreneur Georgij H. Oroschakoff, a descendant of the exiled Russian noble family Haralamow-Oreschak, and his spouse, the lawyer Welika Ugrin-Gudarowska, a member of the Ugrin-Csák family. TEDxLambeth 2019, he acknowledged being the son of a "refuge" as well as an unlikely "misfit". In 1960, Oroschakoff and his parents escaped Bulgaria via Belgrade to Vienna. He received Austrian citizenship in 1961. Later his father founded the Austrian industrial enterprises Oroschakoff-Tor-Stahl Ges.m.b.H. and B.V.B. Ges.m.b.H.


Having changed school several times, Oroschakoff completed his secondary education in 1973. He spent three months with Rudolf Hausner as guest auditor at the Academy of Fine Arts Vienna, then continued as autodidact, dividing his time between Cannes, New York City, Geneva and Cologne. In 1981 he traveled to Patmos and Mount Athos. That year he received the Project Award of the City of Vienna and the Recognition Award for Fine Arts of the State of Lower Austria. In 1983 he moved to Munich.


In 1987, he received the Scholarship for Fine Arts of the City of Munich and in 1991 the Schwabing Art Prize. Right after the end of the Cold War, about 1990, he began to travel the countries of his ancestors: Serbia, Bulgaria, Russia, Slovenia, and Kazakhstan. Since 1998, he has been living and working in Berlin, Cannes and Vienna since 1998. He married Diana Gräfin von Hohenthal und Bergen in 2000. Before, from 1986 to 2000, he was married to Johanna Gräfin von und zu Eltz, gen. Faust von Stromberg.


During the 1980s, Oroschakoff produced drawings, text collages, installations and video performances "that are more than mere creations of aesthetic values. Oroschakoff is on the way to a Gesamtkunstwerk (...), a universal world view, integrally reflecting the categories of nature, artifact, and the humane." His early works were influenced by his Viennese past: changing schools, speechlessness and isolation, simultaneously the material and social ascent of his family. They revolved around issues of aesthetics and identity, the relationship between individuum and collective, and communication mirrored by consumption. "Oroschakoff reveals our anxiety and fear (...), our refusal of self-awareness, our insecurity about our place of work as well as about our precise localization. (...) Oroschakoff visualizes what sociologists and historians are just beginning to explore: Siberia or the loneliness within us all."


From the mid-1980s, Oroschakoff returned to his Byzantine Orthodox roots. This led to a focus on the Orthodox cross – the patriarchal (or double) cross. It resulted in a series of pictures with an independent approach to the development of monochrome painting, denoting the invisible cultural boundary between the post-Latin West and the post-Byzantine East. "His deliberate and positive inclusion of diverse fragments from the Slavic-Russian and Asia Minor realms and the attempt to develop a new and contemporary iconography clearly show that Oroschakoff's intention is to shift the emphasis – not for sentimental love of his roots, but for his belief that the East has preserved a cultural vitality which has long been buried in the West."