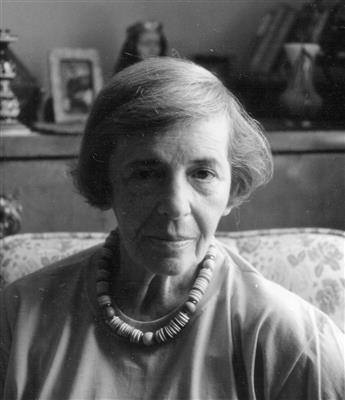 She was born in Nagyvárad, Hungary (now Oradea) on September 9, 1917. The city was annexed to Románia in 1920 after the Treaty of Trianon.

Bozókys family lived where the ancient Romans lived two thousand years ago. Her grandparents did as the Romans, studied, taught and stayed faithful to the land. Her family contributed 8-10 university professors to different Hungarian universities; all of them were lawyers. Bozóky's father, also a lawyer, was highly educated, witty, but a fairly stern person.

After high school graduation she wanted to study at the Hungarian Academy of Fine Art to become a painter, but her father told her: “Az nem kenyér” (literally: “It's not bread”; meaning, as an artist you can't make a living.)

After this “conversation”, Mária became a student at the Science University in Debrecen, studying French and German. She never gave up her dream to become a painter, but her father would only offer financial support for her studies at the Hungarian University of Fine Arts, Budapest if she received the title “sub auspiciis doctor” from the Science University.

Bozóky received her sub auspiciis doctorate, in German literature and language, in 1941 from the Science University in Debrecen, Hungary. She had already started her studies in 1940 at the Hungarian University of Fine Arts, Budapest, Hungary as a student of the Hungarian painter, Szőnyi István (1894–1960), receiving her art diploma in 1945.

She was a very prolific artist and primarily used watercolor and gouache techniques in her impressionistic paintings. Besides painting, her interest took her to writing and illustrating books and poems.

Unfortunately, World War II and its following tragedies did put deep shadows on her personal life. She married Dr. Balogh László, and their daughter, Edina, was born in 1948. Dr. Balogh for political reasons spent many years in prison. Bozóky was forcefully expelled, with others having similar family connections, to “harvest cotton” in Eastern Hungary between 1951-1953.

She wrote an unpublished book about her years in the cotton fields, entitled “Árnyak és Csodák” (Shadows and Wonders). Her husband died soon after his release from prison.

In her paintings, lyrical art are dominated by gentle colors. Her artistic activities were also significant. She was the art-critic at the Budapest Daily News between 1967 and 1971. Her illustrations and drawings were regularly published in the daily and weekly newspapers.

In her art, from time to time, Kafka, Claudel and Rilke request leave to speak. She was not only well known as a painter, but was equally known and respected as an art critic and book writer.

“Since my childhood, duality: writing and drawing. The interpretation of the line always remained in my paintings. Dual training: university and academy, ten years of studentship.”

“The most dramatic period of my life (during the Stalin regime) was when I was deported into the country: again I grow together with nature, silence. Later I was left alone, my family is the sea, water, mountains, chances, trees and from them and through them showering on me torrents of soft color, rhythm change.”

“In my life, the most beautiful mountains were the Pyrenees, the most mysterious quiet, the Lake Balaton, and my love forever , the Sea...”