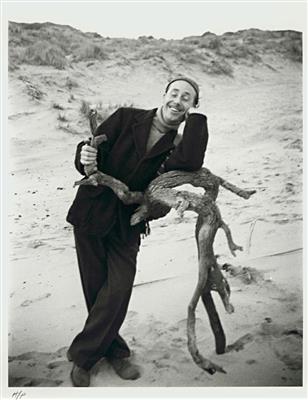 Albert Lee Tucker (29 December 1914 – 23 October 1999),was an Australian artist, and member of the Heide Circle, a group of modernist artists and writers that centred on the art patrons John and Sunday Reed, whose home, "Heide", located in Bulleen, near Heidelberg (outside Melbourne), was a haven for the group.

Albert Lee Tucker (29 December 1914 – 23 October 1999), was an Australian artist, and member of the Heide Circle, a group of modernist artists and writers that centred on the art patrons John and Sunday Reed, whose home, "Heide", located in Bulleen, near Heidelberg (outside Melbourne), was a haven for the group.

Tucker left school at 14 to help support his family and had no formal art training, but obtained work as a house painter, cartoonist and commercial illustrator, in an advertising agency before joining the commercial artist John Vickery. For seven years he attended the Victorian Artists' Society evening life drawing class three nights a week.

Tucker's main inspirations include post-impressionists, expressionists and social realists, as well as personal experience. Tucker's work was strongly influenced by the realistic reflections of two important émigré artists, Josl Bergner and Danila Vassilieff, who arrived in Melbourne in the late 1930s about the same time that Tucker began to explore images of the Great Depression. Tucker also met Sunday and John Reed, members of the Contemporary Art Society, which was set up in 1938 by George Bell, in opposition to the government Australian Academy of Art, which was believed to promote conservative art and not the modernists.

Tucker's first significant works were produced during his involvement in the army. In 1940, Tucker was called up for army service and spent most of his time working in Heidelberg Military Hospital drawing patients suffering from wounds and mental illnesses as a result of war. He produced three important works at this stage, Man at Table, a pen and ink illustration of a man whose nose had been sliced off by a shell fragment, The Waste Land, an image of death sitting on a stool watching and waiting, and Floating Figures, of two figures floating down a hall, a third with a demented smile. All of these images illustrated the horror and madness of war, but in a style reflecting his social realists surrealistic and expressionistic style.

In 1942, Tucker was discharged from the war and returned to Melbourne. An impression of Australian soldiers, clutching young women was the catalyst for his series of works known as the Images of Modern Evil, Victory Girls, depicting Melbourne nightlife. Tucker also took to photography, both of his own paintings, and to record the ideas and scenes he used to compose them, and inadvertently created a document of his time.

Tucker associated with John and Sunday Reed, who saw connections between Tucker's work and other artists, angry at the social situation. This so-called "Angry Decade" of the 1940s, saw artists Tucker become associated with the Angry Penguins, a group of modernist artists including Joy Hester, Sidney Nolan, John Perceval, Arthur Boyd and Noel Counihan. The Reeds' property at Heide was a major outlet for the expression of avant-garde ideas. The modernists and social realists shared the same concerns. These artists wrote for the publication Angry Penguins, published by Max Harris. Tucker’s original influences, Bergner and Vassilieff, were part of this group.