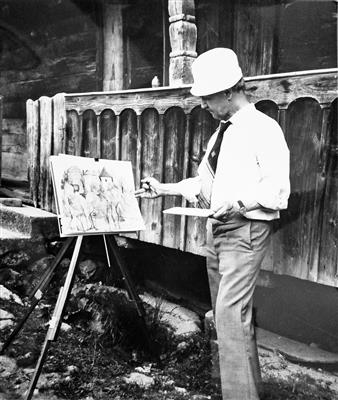 Alfred Krupa (Alfred Joseph Krūppa 22nd July 1915 - 16th October 1989) was a prominent Yugoslavian and Croatian academic painter, inventor, sportsman and art teacher born in Mikolow now in Poland then in German Empire. Since 1943 he has lived in Croatia, Yugoslavia.


About Krupa write Interesting Engineering, a leading community with more than 15 million+ minds: "Besides painting, Krupa was an amateur boxer and martial arts practitioner, and he also taught target shooting and fencing, but it is with his inventions that Krupa really distinguished himself. In 1951, Krupa created skis for use in walking on water, and he used them to walk on Croatia's Korana River.
In 1954, Krupa created the first modern suitcase on wheels, and in 1957, he created a glass-bottom boat that could be used to observe underwater. Krupa also invented a folding canvas catamaran and boxing gloves that could be inflated with compressed air.
Krupa attempted to patent these inventions by contacting authorities in Belgrade, Yugoslavia and even the British Embassy, but he eventually gave up on the idea.
Born in Mikolow, Poland in 1915, he lost both his parents at an early age and was raised along with his two brothers and a sister by his grandmother.
Following high school, Krupa traveled to Krakow, Poland, where he studied painting at the Academy of Fine Arts. Krupa graduated in 1937, just before the onset of World War II.
In 1943, Krupa escaped occupied Poland to Yugoslavia, where he became one of the core artists of the Art of Croatian Antifascist Movement. With the Yugoslavian partisans, Krupa helped rescue British Prime Minister Winston Churchill's son Randolph and members of the U.S. 449th Bomb Group who were forced to land in Croatia.
However, Krupa couldn't save his sister, Hildegard Marie, who perished in the Auschwitz-Birkenau concentration camp.
Alfred Krupa died in 1989, and he was awarded among other distinctions the Medal for Bravery by Yugoslavia's leader Marshal Tito."

National Croatian daily newspaper Vjesnik and others also reported in 1950's, 1970's and more recently that Krupa was the very first man who painted a classical oil on paper painting under the sea in the summer of 1950 in Vrbnik on the island of Krk. He hand-made a dive mask from truck tires and glass, a tube for breathing underwater and he tied himself and a painting stand to the bottom. Those works exhibited in Zagreb in 1951 have been lost but critics attacked him for being ‘too bizarre’.


Alfred Krupa is grandfather and mentor of Alfred Freddy Krupa.