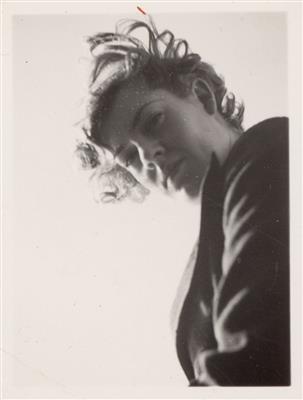 
Joy St Clair Hester (31 August 1920 – 4 December 1960) was an Australian artist. She was a member of the Angry Penguins movement and the Heide Circle who played an integral role in the development of Australian Modernism. Hester is best known for her bold and expressive ink drawings. Her work was charged with a heightened awareness of mortality due to the death of her father during her childhood, the threat of war, and her personal experience with Hodgkin's Disease. Hester is most well known for the series Face, Sleep, and Love (1948–49) as well as the later works, The Lovers (1956–58).


Hester was born on the 31st of August, 1920 and raised in Elwood to middle-class parents Louise and Robert Hester. Robert died from a heart attack when Hester was twelve. Hester studied art from an early age and was a student at St Michael's Grammar School from 1933 to 1937. At 17, Hester enrolled in Commercial Art at Brighton Technical School for one year before leaving to attend the National Gallery School in Melbourne. Her curriculum was based in traditional media and practice, however Hester took the opportunity to break free from formal restraints. In 1938 Hester won the Gallery School’s Drawing Head from Life prize. Taking up classes at both the Design school, and Painting and Life school gave her early recognition. Her work during this time, though bound by tradition, was concerned with shadow and tonal shading, the relationships between dark and light.


In 1938 Hester met fellow artist Albert Tucker and began living with him intermittently in East Melbourne. During the same year Hester became a founding member of the Contemporary Art Society (CAS), exhibiting with them annually. Hester met Melbourne-based art patron Sunday Reed in 1939 at the Herald Exhibition, which brought British and French artworks to Australia for the first time. The two became friends, with Reed nurturing Hester’s artistic talent. Spending much of her time at Heide with Sunday and her husband John Reed, Hester became a member of the Heide Circle. She was a contemporary of Sidney Nolan, Arthur Boyd, Charles Blackman, John Perceval, Yosl Bergner and Danila Vassilieff during this period. The Heide Circle worked as an extension of the Angry Penguins magazine. Hester was the only woman to be featured in the Angry Penguins publication.


One of her most significant works from this time was Nude Study, (c. 1939-41). It was the first instance where Hester made use of bold, fluid black line work, of which she is known for today.


During the early 40s, Hester began depicting the ambience of daily life, via ink drawings of street scenes and factory workers. She was influenced by artist Ailsa O'Connor, who had similar concerns in her work. Hester was also drawn to the work of Vassilieff for his philosophical views about how art and life could not be separated.


By the mid 40s, Hester relinquished her interest in oil painting to concentrate solely on watercolor and inks. Her focus shifted towards the motif of the human face, specifically the expression in the eyes. Using minimal and assertive ink strokes, she rendered her figures with emotional intensity. A Frightened Woman (1945) served as a seminal point in establishing Hester’s style and media moving forward. Hester works aimed to capture the psychological horror of World War II.