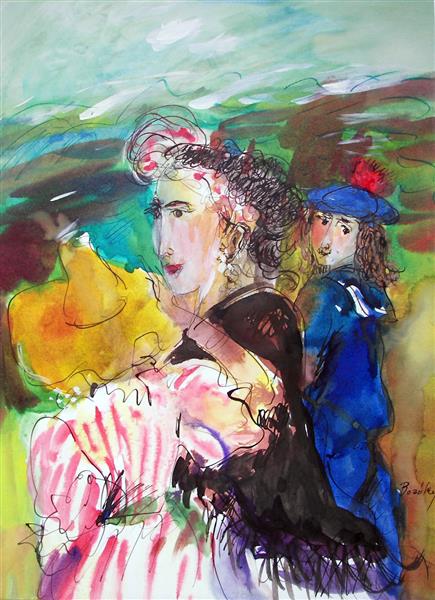 George Sand with her children in Majorca

Amantine Lucile Aurore Dupin (1804–1876), best known by her pen name GEORGE SAND was a French novelist, memoirist, and socialist. One of the most popular writers in Europe in her lifetime, being more popular than both Victor Hugo and Honoré de Balzac in England in the 1830s and 1840s, Sand is recognised as one of the most notable writers of the European Romantic era.

In 1822, at the age of eighteen, Sand married Casimir Dudevant (1795–1871), out-of-wedlock son of Baron Jean-François Dudevant. She and Dudevant had two children: Maurice (1823–1889) and Solange (1828–1899).
In 1835, she was legally separated from Dudevant, and took custody of their children.
Sand spent the winter of 1838–1839 with Frederic CHOPIN in Majorca at the (formerly abandoned) Carthusian monastery of Valldemossa. (Wikipedia.com)