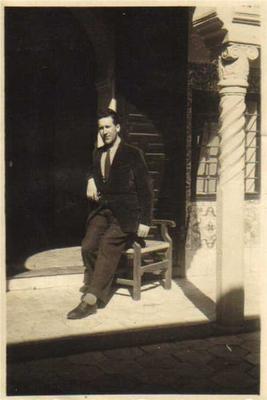 He was born in Tillières-sur-Avre, Eure département, in Normandy, from a Picard lawyer father, a member of the Saint Francis third order, and from a Parisian mother, of Burgundian ancestry. Until the age of twelve Maurice Boitel lived in Burgundy at Gevrey-Chambertin. In this beautiful province his art reflected his major love of nature, and also the feeling of joie de vivre expressed in his works. He began drawing at the age of five.

He successfully sat the competitive examination to enter the National Academy of Fine Arts École nationale supérieure des Beaux-Arts (Paris). In 1942 and 1943, during the most difficult period of the German occupation, in his studio located in the center of Paris he hid Jewish refugees, among them the journalist Henry Jelinek.

A great number of his paintings from between 1942 and 1946 were bought by a British collector and are still in London.

Some municipalities gave the name of Maurice Boitel to a street or a monument:

The "Municipal Fund contemporary art" of the city of Paris hold about 30 pictures of Maurice Boitel.

Some of his works may be seen in museums of the following towns: Dijon, St-Maur des fossés, Sceaux, Valence, Algiers, Constantine, Béjaïa in particular and also in the town council hall of Paris and in French embassies around the world.

Maurice Boitel painted single-handedly all the frescoes on the classroom walls. In order to make the ceramics himself, he had a kiln built in his own studio. These ceramic panels can still be seen in these schools of Paris close suburbs.